It has been brought to my attention that my incognito naps out in the car during lunch break are not so incognito after all.  And that’s very unfortunate because when you’re up doing nails until 2am on a school night, naps just sort of happen whether you want them to or not.  Hubby told me he was talking about me with one of his friends who mentioned he had seen me napping out in my car:

ME:  Well, did you take up for me?  Did you tell him most of the time I am doing IMPORTANT STUFF and definitely NOT napping?

HIM:  Like, are you doing squirrel surgery out there or something?  And then fall asleep in the middle of it?  Ooooooh, sorry.  You died.  I mean, I don’t know how to make what you’re doing sound important.

ME:  Ugh.  Now he thinks I go to my car specifically to nap.  I’m Instagramming!  Sometimes scrolling takes a very long time.  And then I fall asleep on accident.  ON ACCIDENT.  There’s a difference.

HIM:  He said you looked pretty committed to it.

Well, greeeeeaaaaaaat.  It’s one thing to be sleeping with your mouth lolling open around a bunch of strangers on an airplane, but another thing entirely for a co-worker to see you looking your most unattractive.  I know I am an ugly sleeper when I attempt it sitting upright.  Either my mouth hangs wide open or my head falls into my own lap.  And I wake up every 90 seconds to put it back where it belongs before it ends up in my lap once again.  It’s an extremely hideous cycle, and one I prefer to do in private.

So until my job builds me my own personal napping room, I suppose we should just get on with the polish.  I received a nice little swatch pack from MDJ Creations to review, and the gorgeous Fairytale Flakies collection was in it.  See: 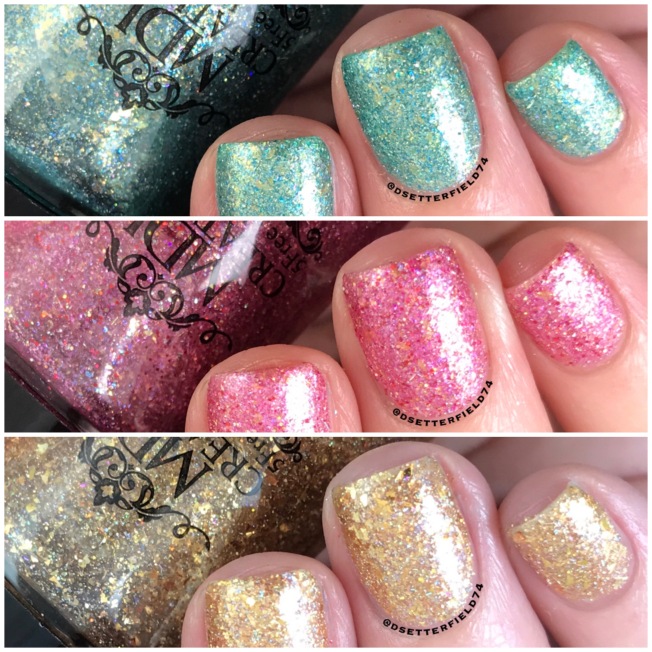 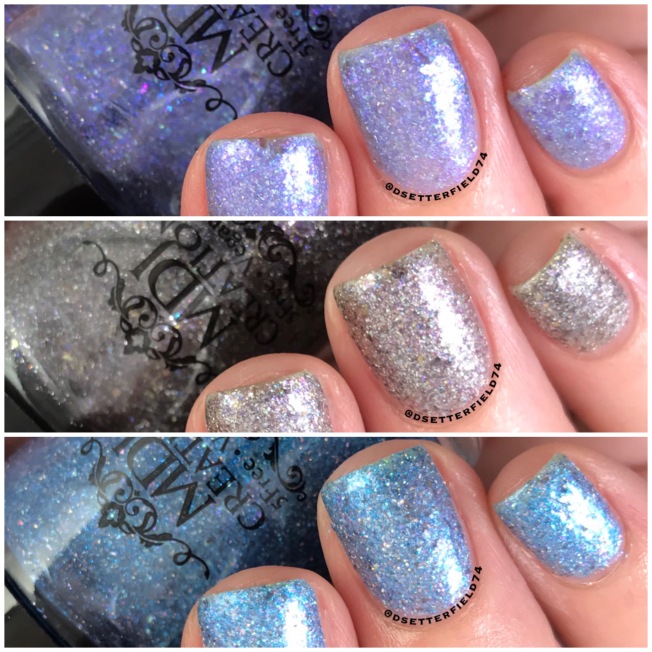 Dreamy, right?  Love me some flakies.  They make everything better.  I bet even my napping mouth would look good with flakies on it.

Okay, so about this collection.  It came out back in the summer and now it’s extremely limited.  Some polishes are still available as singles, but some you can only get if you purchase the entire set.   So, no rush or anything, but GO NOW.  Tomorrow may be too late.

You properly panicked now?  Well, you should be.

First up is Jasmine: 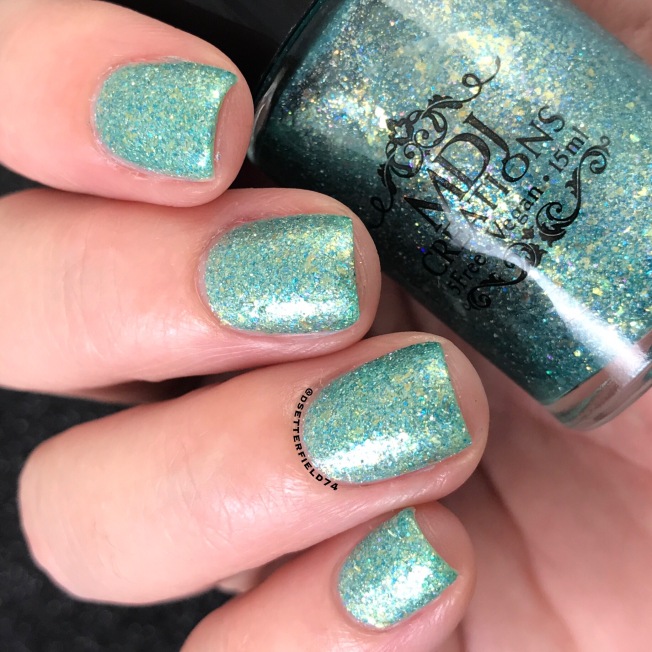 Welp, you’re gonna need this one.  It’s turquoise and green and gold and delicious.  You need no other reason.  Except for maybe it’s about to sell out, and now you have a crisis on your hands.  Erlack!

No nail art on this one because I did something hideous and this is a happy blog, so …

Next up is Aurora:

OMG, are you dying?  What a pretty pink; so girly!  But then I added some black stamping, and the contrast is making me weak in the knees.  My brain has stopped holding my mouth closed and there might be a drooling-type scenario in progress.  Ugh.  I love. 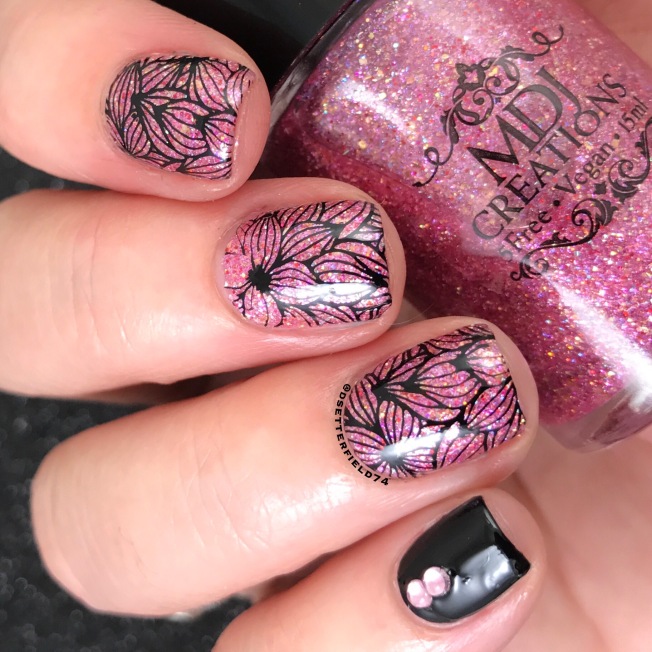 Now we have Belle:

Oh so fancy!  But listen, guys.  About this one.  It’s only available if you purchase the entire set; the single polish is sold out.  However, the set is fabulous (Clearly.  You’ve been paying attention right?), and you’ll be thrilled with it, I swear.  And then you can toot your own horn for your wise decision making and get back in pajamas cuz LIFE = SUCCEEDED.

I’m okay with this nail art:

A sideways french tip never hurt anyone.  I think the purple makes the gold look even more gold and extra flakie-y.  It’s truly pretty and you want it so much.  OH YES YOU DO. 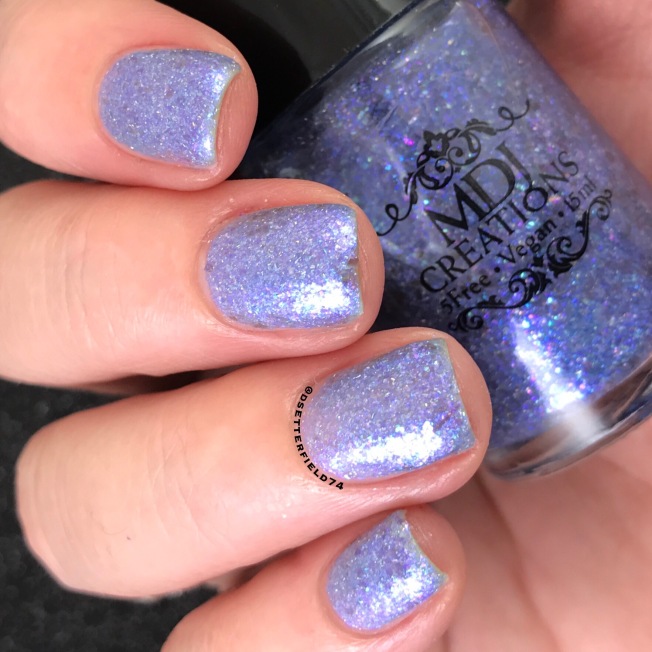 Where my purple lovers at, cuz this one has your name alllll over it.  (It does.  I checked.)

Don’t ask about this nail art.  It looked better in my head:

Wellllll, I tried.  It’s sort of a stamped version of the spun sugar technique, which I guess is pretty cool and definitely less messy.  So there’s that.   I just feel like it’s missing something.  I dunno.  I’m not winning any awards any time soon, pretty sure.  Unless it’s for laziness, cuz I’m super good at that.  Like EXPERT level.  I once worked in a building across the street from my apartment, and I still drove my car over there to park in the parking lot.  I’m almost certain that’s the saddest story ever told.

Next up is Happily Ever After: 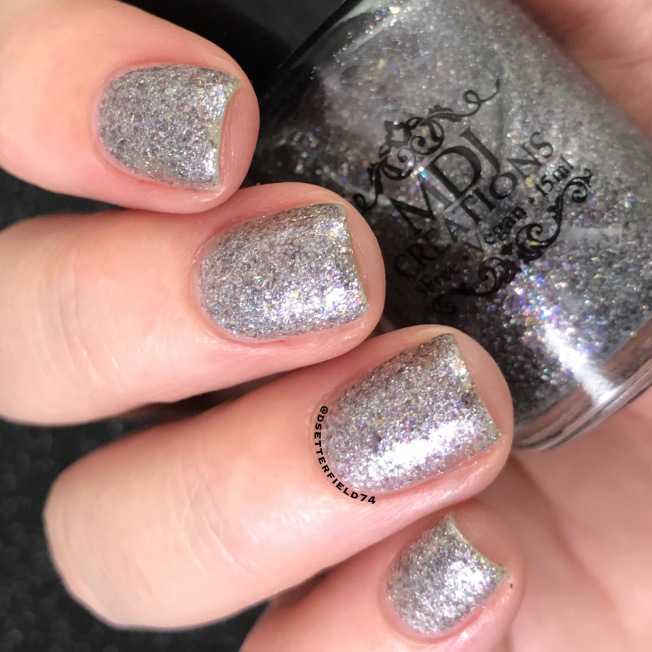 Now this one is a fun one, cuz it’s a taupe flakie and how many times have you seen a taupe flakie before?  And then there’s this surprise pink mauve shimmer in it, which makes me love it even more.  Unfortunately (or fortunately, depending on how you look at it), it’s only available in the full set since the single polish sold out.  Oh well, you were buying the set anyway.

I underestimated the bling:

Stamping doesn’t show up quite as clear as I’d hoped against that sparkly base, but I’m still diggin it.  I like the red against the taupe, specifically.  It’s an uncommon combo, and I’m gonna go ahead and celebrate like I invented the dang thing.  Hooray! Lastly, if you do purchase the entire set, you get this lovely lady for free!  Here’s Once Upon a Time:

This one is a sheer pink rainbow with blue shift, marketed as a topper but here I applied three coats on naked nails just to see what it’d do.  You can still see the nail line, but I think it’s lovely. 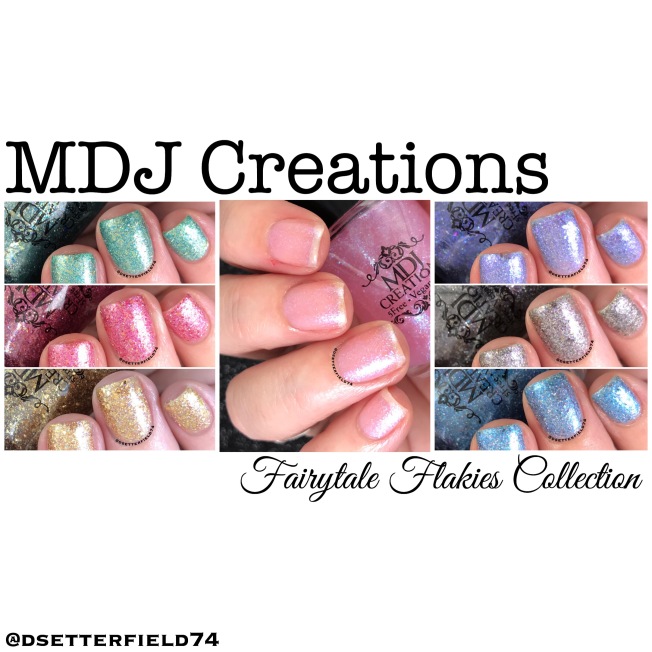 Every single one of these polishes can either be toppers with one coat or full coverage with 3 coats.  My swatches were all full coverage attempts so you could get an idea of the true color of the polish without interference of any base color.

Let me remind you how quickly you need to move on these.  Click here and get to shoppin’.  In addition to it being an emergency, there’s a coupon code.  Here’s the deets:

Code: CHRISTMASGIFT25 for 25% off plus a free gift (while supplies last).  Leave a message in the notes section on your free gift preference – choice of lip gloss jar, mini polish, mini cuticle oil, or ointment sample.  Minimum purchase of $25 is required.  Coupon expires 12/25.

And now you’re all set for the day.  Buy you some pretties, save you some money, get me a gift card.  Anything else you had planned is moot.