The heating repairman just showed up at our front door, and I legit stayed on the couch in my pajamas and robe because my laziness (and decorum) has no boundaries.  I mean, I don’t know if you’re supposed to put on clothes when strangers come over, but I literally couldn’t generate enough curiosity to find out.  He keeps coming in and out between the heating unit and the thermostat in the living room, and hubby keeps giving me stink eye in a have you no shame! kind of way.  NO, no I don’t have shame.  I have a blog to write, and a couch that needs sat upon, so I basically have no choice but to sit here and look as cute as possible (albeit half naked).

Well, now they’re both talking sports so I’m most likely off the hook anyway.

I have the new Night Owl Lacquer holiday collection to share with you today, and YOU. ARE. EXCITED.  Take a look:

Bling bling!  I’m so loving all these holiday collections lately.  Everyone needs a bit of sparkle, don’t they?  I sure do.  I also apparently need to put clothes on cuz the eyeballing has reached its pinnacle.  My husband is so cute when he’s trying to communicate without words.  And then I act like I don’t understand what he’s saying.  He’s either flirting or doing charades, cuz anything else just wouldn’t make sense.

First up is Twinkling Lights:

Lindsay wanted to create a polish inspired by one of her childhood loves of driving through town looking at Christmas lights.  This was one of my favorite things as well.  Every year, my family drove about an hour away to Christmas Tree Lane just to drive through it a total of 7 minutes.  But they did it for my brother and I because we absolutely loved it.  In June, it was just a trailer park with like refrigerators and cars with no wheels outside.  But in December, it was magical.

This may be considered a glitter topper because it’s sheer enough, but I applied about three coats on top of my naked nails. Full of silver, red and green holo glitters, holographic rainbow glitter, crystal rainbow glitter and rainbow iridescent glitter.   You need this just for the amount of effort that’s in here.  That’s four kinds of glitter, people.    GET ON IT.

And here’s some mediocre nail art:

Well, now the pizza man has showed up, so it’s literally pajamas for everyone. Never mind I’m the only one in pajamas, and it’s 2:30 in the afternoon. But whatever. Stop judging me with your eyes.  You have one job and that’s PIZZA.

Next up is Bling It New Year: 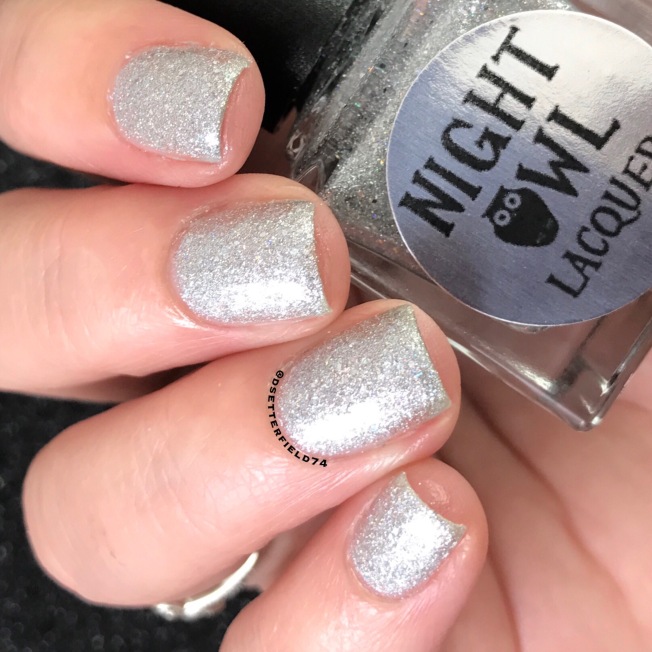 My brain has officially stopped holding my mouth shut.  What a lovely silver!  Like, it’s silver but with extra silver.  I don’t even know, except that I’m verging on hysteria over it.  Lindsay, what did you go do?!  It’s the nail polish equivalent of voodoo is what it is. 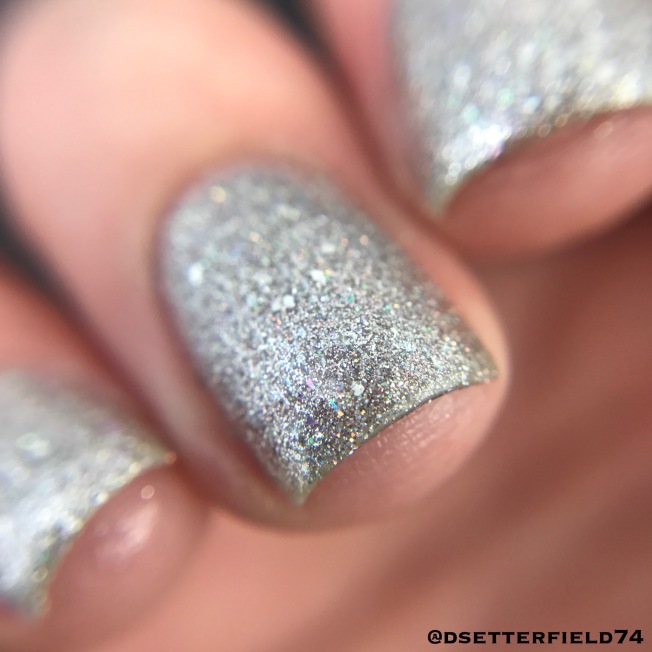 So we have a silver polish packed with silver holographic glitters and shreds and white micro flakies.  WHITE MICRO FLAKIES?!  Well, I reckon I’m gonna need a bucket full of those.

I used the Uber Chic Beauty Christmas 02 plate and then filled all the bulbs in with sheer polishes.  It’s called the lead lighting techinique, but I’m no expert.  As you can clearly see.  Ugh.

Next up is Sugarplum Dreams:

This is absolutely beautiful. I see no valid reason you’d say otherwise.  This polish almost makes me wanna have my husband get the Christmas tree down from the attic and then watch him assemble it while I have a Starbucks.  Otherwise known as DREAM SCENARIO.

Goodness, that’s pretty.  That blurple base is to die for.  Look closely in that macro and you can see my meager attempt at capturing its bright violet shimmer.  However, the iridescent glitter is like BAM! and the white micro flakies are straight up seducing me.

If my nails weren’t stunted little nubs, you might be able to tell these are ornaments.  However, I love them anyway.  Used ornament stencils from What’s Up Nails, and then matted the whole thing using the Lucky 13 Lacquer matte top coat, my official new favorite.

Here’s Meet Me Under the Mistletoe:

Well, how else were you going to get through the holidays without a red nail polish?  Basically, Lindsay has saved you.  This is a good one too.  Which doesn’t surprise me, cuz the minute Night Owl Lacquer releases something not amazing, pigs are probably flying and I’ve got pants on.

This is a bright red shimmering shade with red holographic glitter and green/gold iridescent glitter.  So so pretty.  Two coats, smooth like butter.  And I love it so much.  Can’t wait to stick my fingers in people’s faces with this one on.  Completely and 100 percent-ly socially acceptable.

My favorite nail art of the group:

Is this not precious?  I used the Uber Chic Beauty Christmas 02 plate again and they had this layered two step bow image.  Now, I realize I didn’t line up the black outline image as perfect as I could’ve – except on my pinky in a brief moment of geniosity .. geniusness .. geni-something.  Well, you get it.

A chocolate lava cake has appeared out of nowhere. Is this real life? Is Leonardo here too, cuz that’s the only surprise left.

Last but not least is My Love For You is Evergreen: 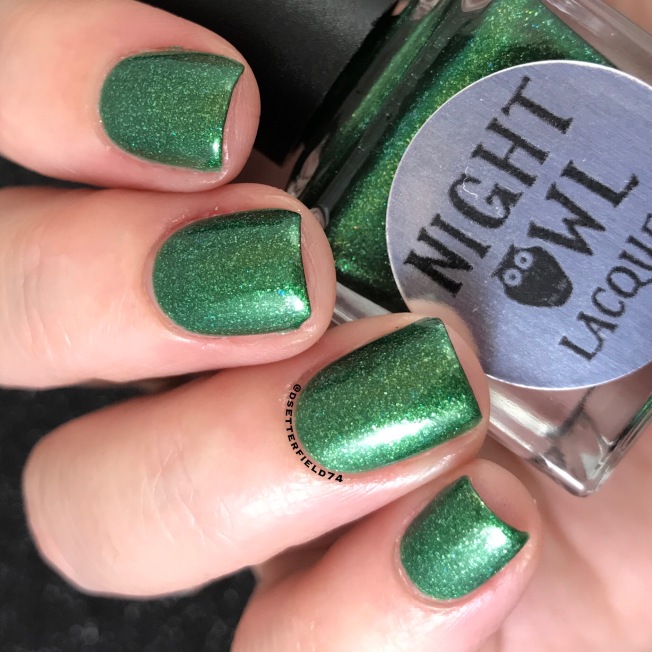 OMG, my love for you IS evergreen, cuz I’m so dying right now.  Cuz, GREEN.  Always, GREEN.  Forever and ever, GREEN.  This holiday collection – as well as my life – is complete.  We can all sit back down now.

Do you see all that?  Such depth and magic in one little polish.  Green shimmery base with gold color shifting fleck (yes), green micro flecks (uh, yessss) and green holographic glitter (dead).  Lindsay, now look what you’ve done.  I may or may not be in the fetal position right now.  Drooling.  With my eyes half closed.

I’m quite the catch.

Added some fun candy cane stripes using the Lina Feeling Shapely 01 plate, plus I had this cute little charm from the Cosette Nail Shop that just went perfect.  If I do say so.  And I do.  I did!  I said so.

This holiday collection retails for $42 or you can get single polishes for $9 each.  However, if you’d like to save a bit of money, come join the Facebook fan group and get yourself a little discount.  Click here.  The current code expires on 12/9 so no rush or anything, but GO NOW.

If you miss that coupon, you can get free shipping on a $50 order using code FREESHIP50.  I love free things.  I’ll buy a billion dollars worth of product just to get something for free.  Click here to order.

Well, I suppose it’s time to get myself off this couch and do something today.  A nap sounds good.  Then after that, Netflix.  Then nail polish.  And probably Starbucks.  In other words, var var busy.