Something has happened to the weather.  I had to get my coat back out of the closet today, which was both stupid AND ridiculous since it took a whooooooole lot of effort to put it in the closet in the first place.  Cuz things just don’t get done around here sometimes, or at least not on any normal-sized kind of time frame.  I have what hubby likes to call A PROBLEM, which may or may not be true, but look at mah nails! though, and I’m sorry, what is your question?

Listen, I can’t be expected to do all the things.  How is Dancing with the Stars gonna get watched if I have to go be putting coats in closets all day?  And NAIL BLOGGER EXTRAORDINAIRE doesn’t just happen by itself, ya know?  Besides, I have these three adorable little stories to tell that wouldn’t exist if I had all my shit together:

1.  I left my Christmas tree up until well past Valentine’s Day.  It’s amazing how you can completely ignore something for so long, even though it is huge, has blinking lights, and is standing right next to the television.  The only reason it got put away finally is because someone else did it.  Cuz who honestly wants to shove a ginormous tree back into a teeny tiny box?  NOT ME.

2.  I had winter sweaters in a laundry basket on my floor for so long, at some point I was just able to wear them again.  There’s a math problem in there for you, if you’re interested.  Currently, I have another pile in my bedroom that has items in it from the vacation I took in 2015.  How I still manage to have OCD is beyond allllll the comprehensions.

3.  After a pretty consistent month-long stint at the gym, I continued to pay for the membership for about three years afterwards cuz in order to cancel they made you do it in person.  Which would work just fine if there was a Starbucks in there, but since there wasn’t, I suppose paying $25 for the next 36 months for no reason whatsoever would be the logical next step.  Good thing my debit card just eventually expired or else I might own the gym by now.

So yeah, I am quite the catch, you might say.  Hubby loves being married to me, I just know it.

Oh, but the polish!  I have some pretty ones to show you today.  I received 5 out of the 10 shades from the new Glam Polish Dance with Dragons collection, inspired by the Game of Thrones tv series.  And if you love you some multichromes, we’ll you’re about to have the best day ever then. 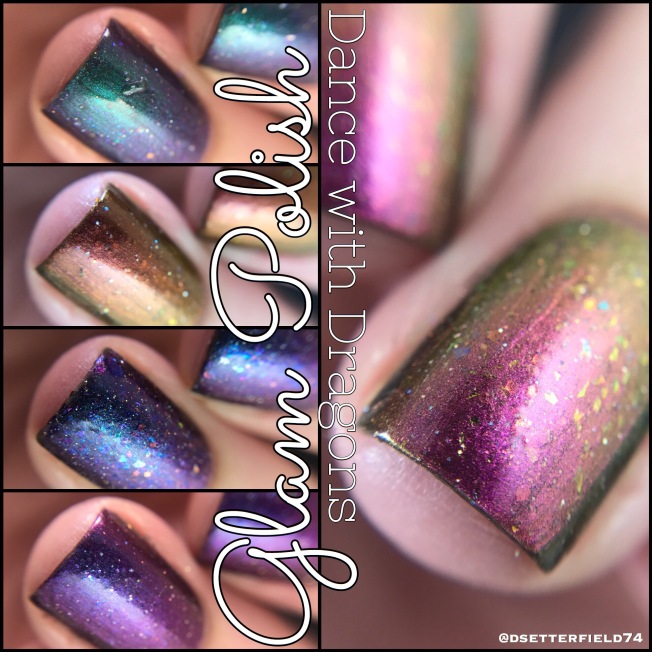 Told ya.  You’re gonna need a thousand drool buckets or at least someone to hold your mouth closed, cuz the lolling tongues – well, they are everywhere.

First up is The Dance of Dragons: 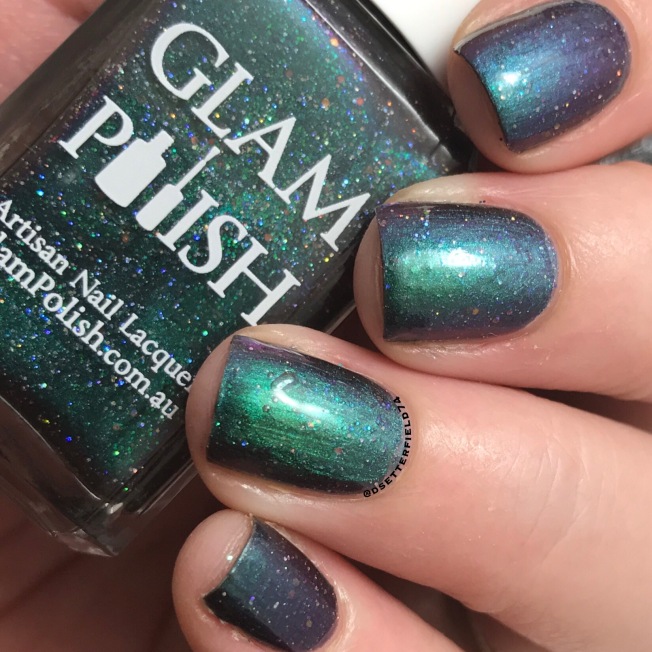 This one is a green/blue/red multichrome with green/purple shifting microglitter, ultra holo glitter, iridescent shifting glitter and fine holo microglitter.  That’s basically all the glitters if you’re keeping track.

Multichromes can be hard to photograph, and I’ll admit I had a hard time catching the shift the way I wanted.  But these macros turned out rather delicious: 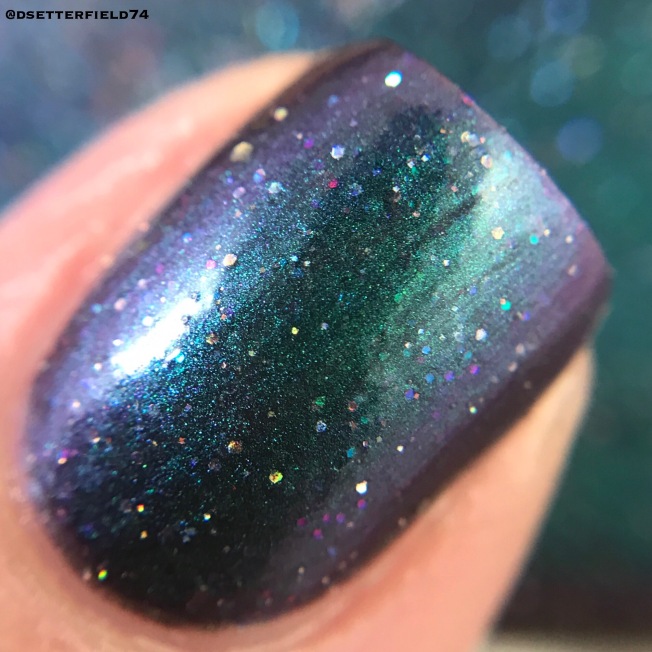 Mercy.  If this one ends up on all your surfaces, no one’s surprised.

Some nail art I did: 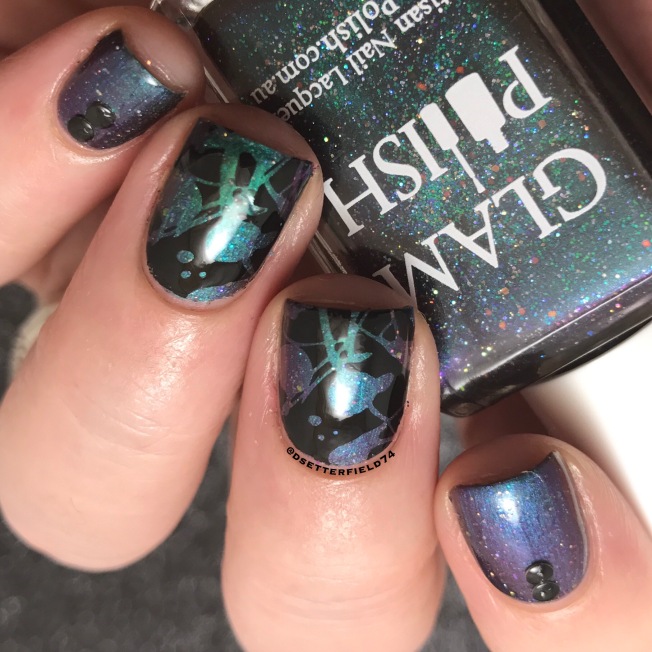 Used the new Uber Chic Beauty Texture-licious 2 plate for this one.  It turned out okay.  I mean, no trophies are coming, but it’s still a decent mani.

Next up is Kissed by Fire: 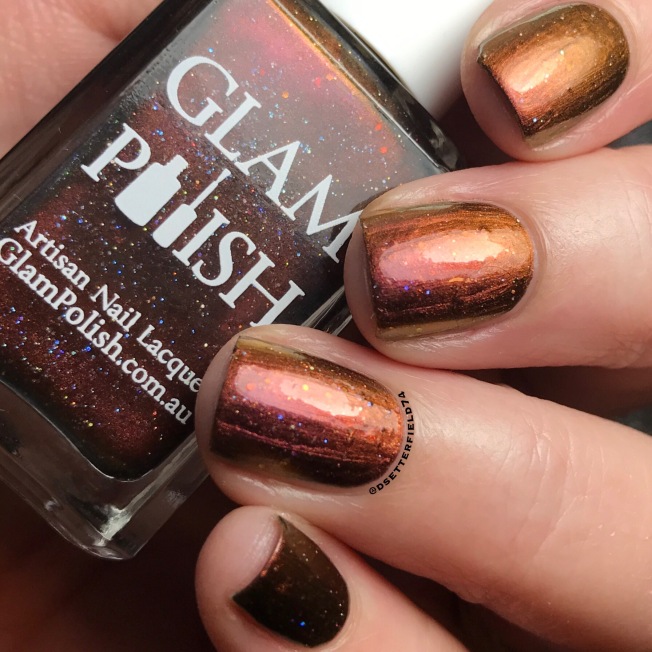 This one is a red/gold/copper multichrome with red/gold shifting microglitter, ultra holo glitter, shifting iridescent glitter and fine holo microglitter and OMG who just fell in love super hardcore?  This looks like melted gold or liquid fire.  It’s just so dreamy.  Anytime I see colors like this, though, it’s a noodle leg epidemic.  Staying upright is nigh on impossible.

Ready for sleepy.  Cuz how cozy is this? 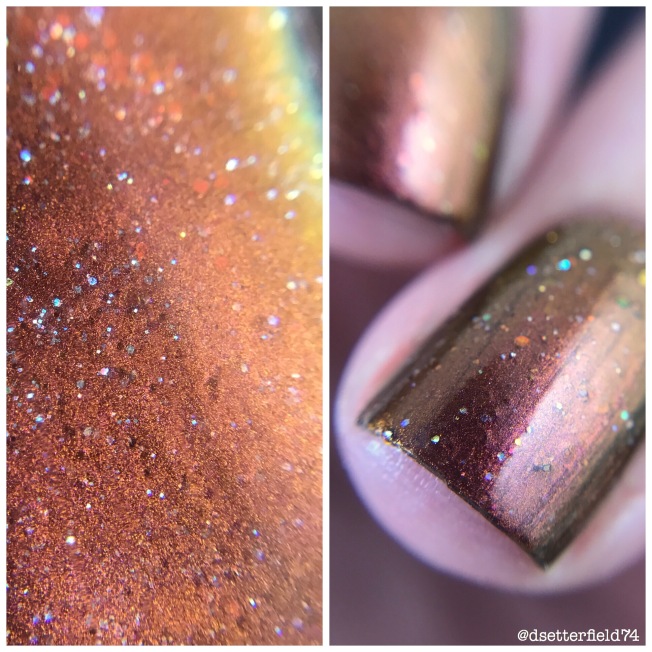 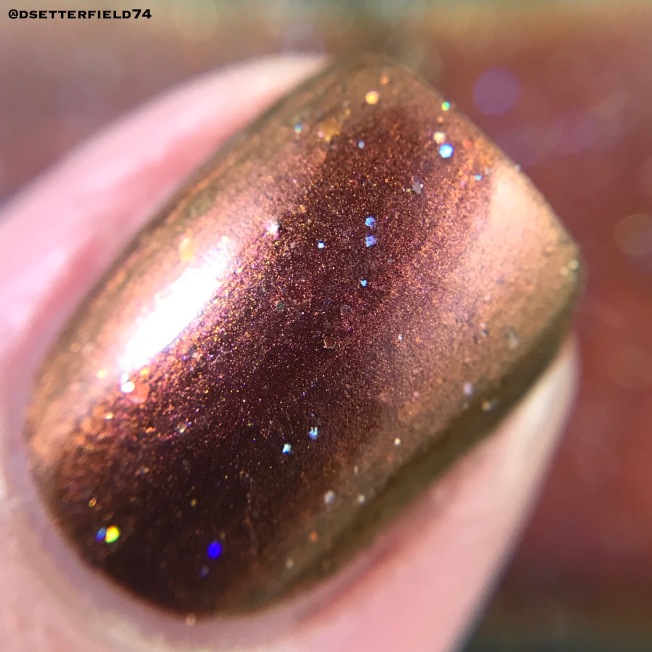 It’s like the best pile of blankets you’ve ever snuggled in.  Plus a bunch of kitties.  HEAVEN. 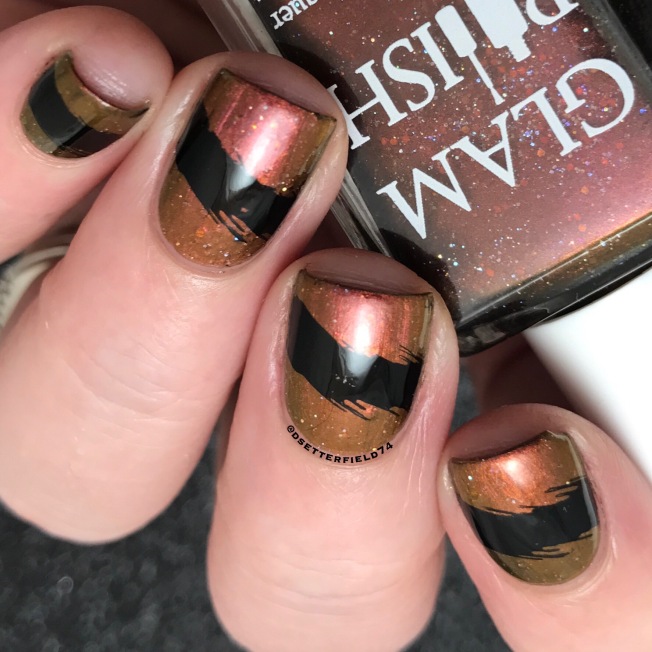 Used the Uber Chic Beauty Texture-licious 2 plate again, and I will say I do not hate this.  But that’s about all I’m gonna say.  NEXT.

Now here’s The Lion and the Rose: 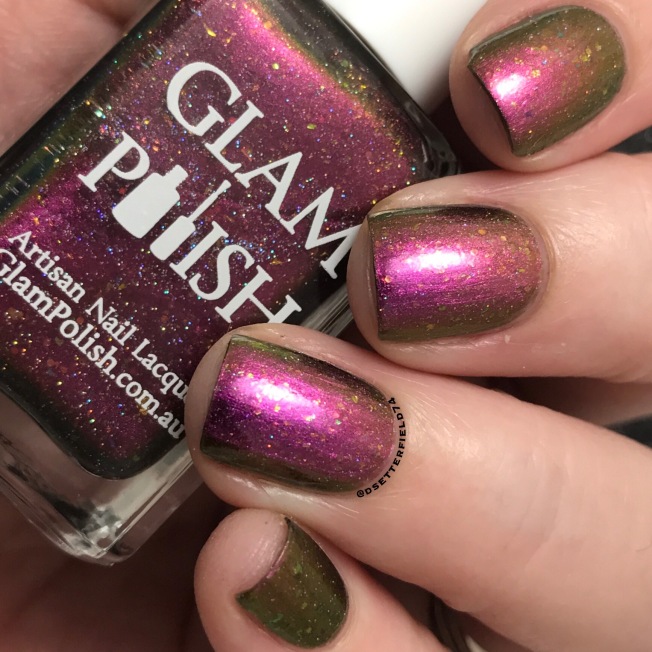 This one is a red/violet/gold/green multichrome with shifting multichrome flakies, shifting iridescent glitter, and fine holographic microglitter.  Brain. Stopped. Working.  GUYS.  It just got super pass-out-y in here.  How the rest of this blog is getting written, well, it’s basically a crapshoot. 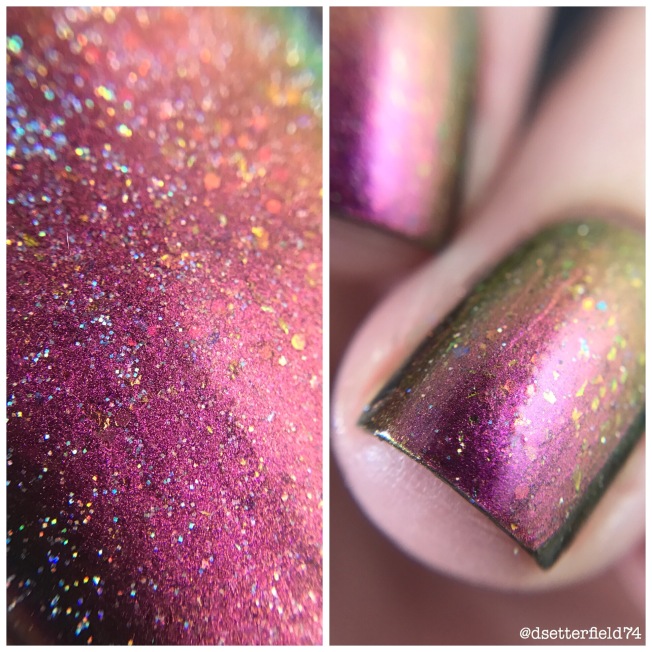 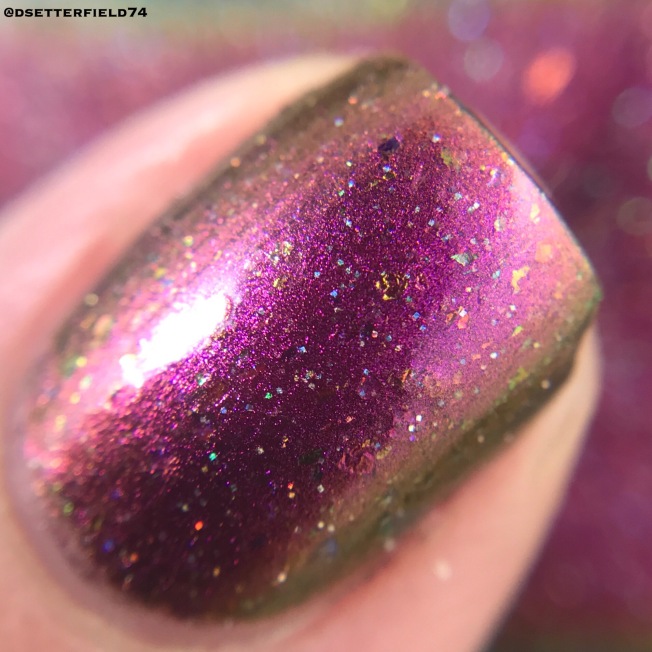 This one is okay: 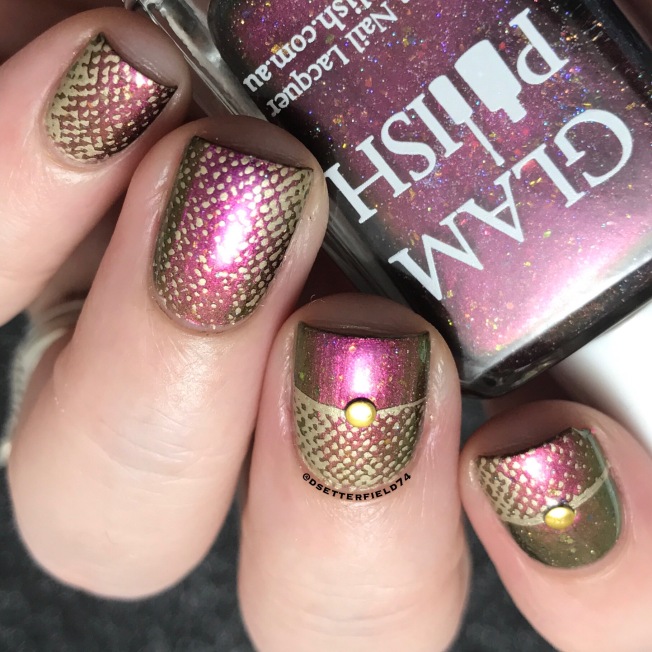 A bit more effort involved, what with the taping off of half my nail and whatnot.  I semi-thought this one through, although we’re riding on the edge of stamping all the things.  Thankfully I got distracted by a sandwich, or who knows where we’d be right now.  Hot mess, at the minimum.

Used the Uber Chic Beauty Texture-Licious 2 plate AGAIN again and the Lina Feeling Shapely 09 for the gold horizontal lines, you know, in case recreations are in order.

Next is The Wars to Come: 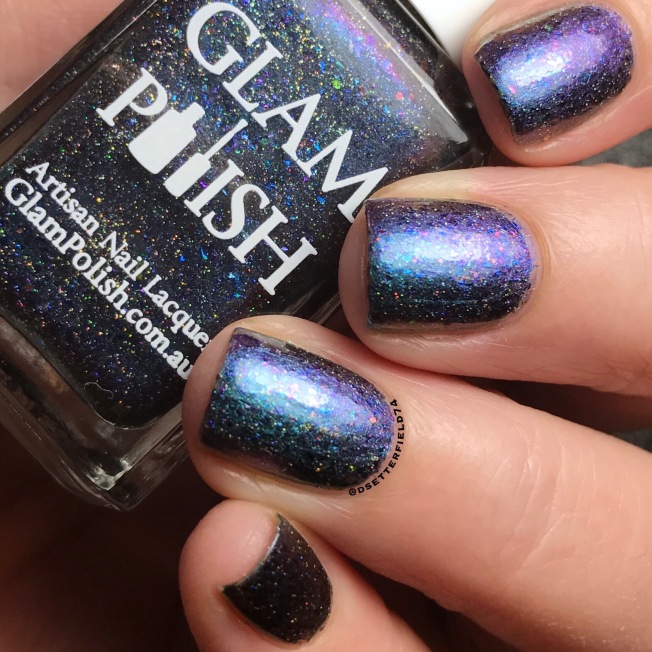 This one is a cyan/blue/violet sheer multichrome with a mix of shifting multichrome flakies, fine holographic glitter and a hint of shifting iridescent microglitter.  It’s all your purple polish dreams come true, plus pajamas.  If there’s not 27 bottles of this in your shopping cart, I am var var concerned about the state of your brain. 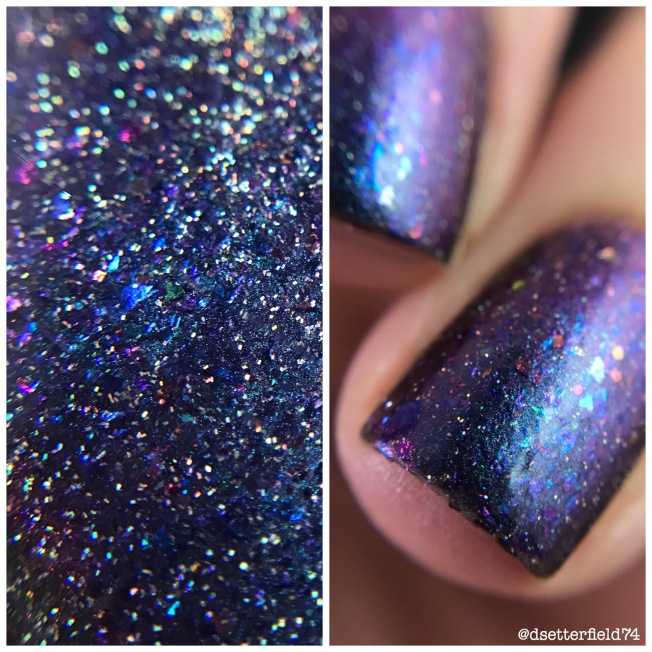 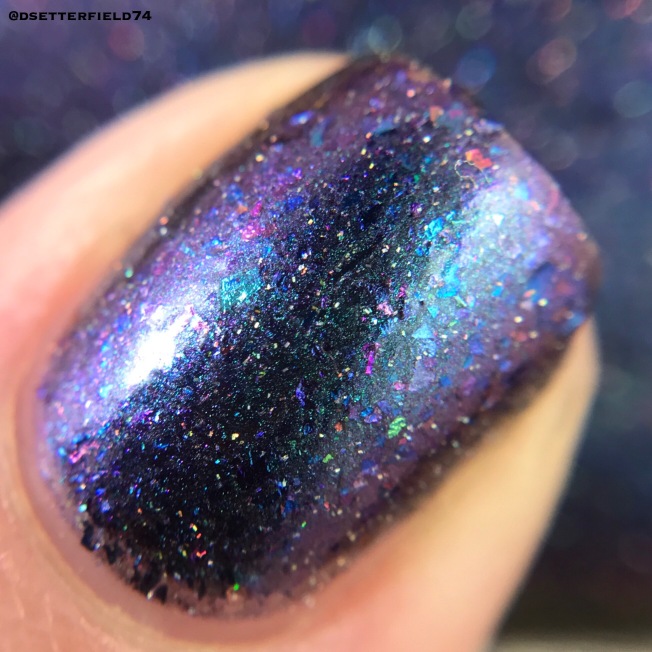 I mean, 27 bottles plus back-up bottles.  Cuz rational behavior is for other people. 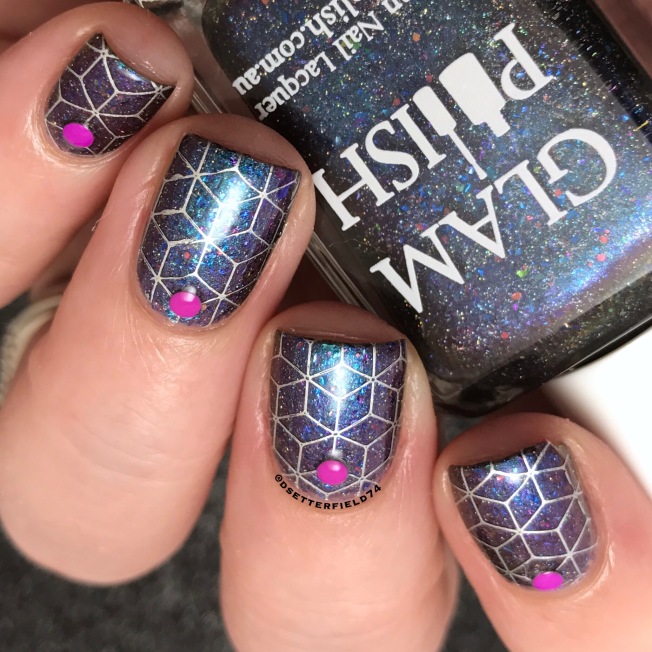 Finally!  It’s so simple, but I think the silver and hot pink look good on this.  How’s that for a brief moment of mojo?  I hope there’s a gift card coming, cuz effort should be rewarded, that’s why.

Used the Lina Feeling Shapely 09 plate if you’re curious.  (You are this time!) 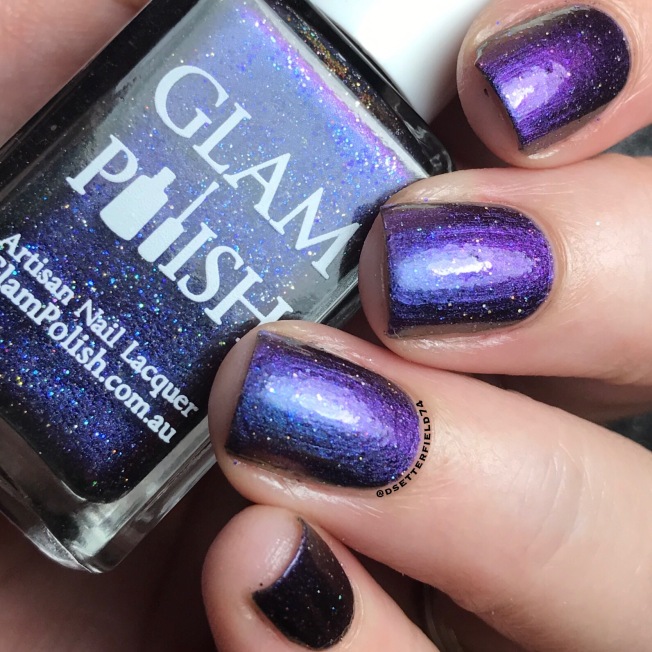 This one is a violet/blue/red multichrome with blue/red shifting microglitter, ultra holo glitter and fine holographic microglitter.  Seriously, double the purple!  Who just died a little?  Ugh.  And this is my fave kind of purple too.  A red-toned one.  Legit no joke happiness in a bottle.

To seal the deal: 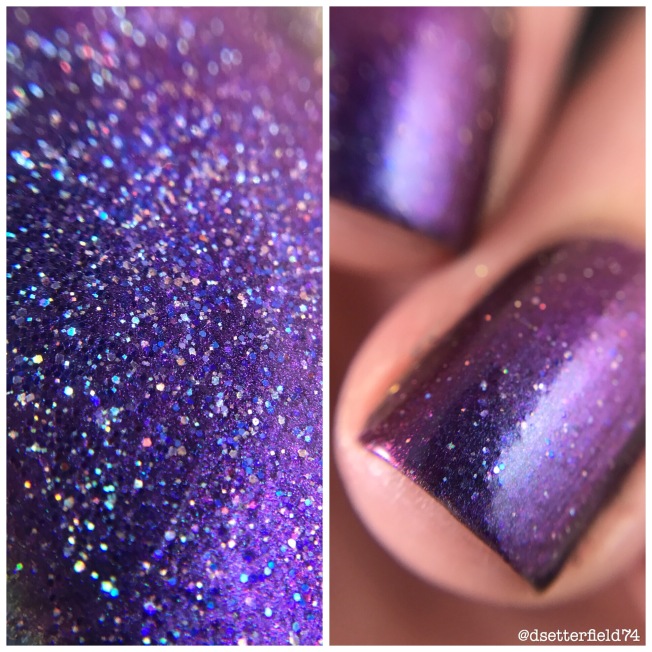 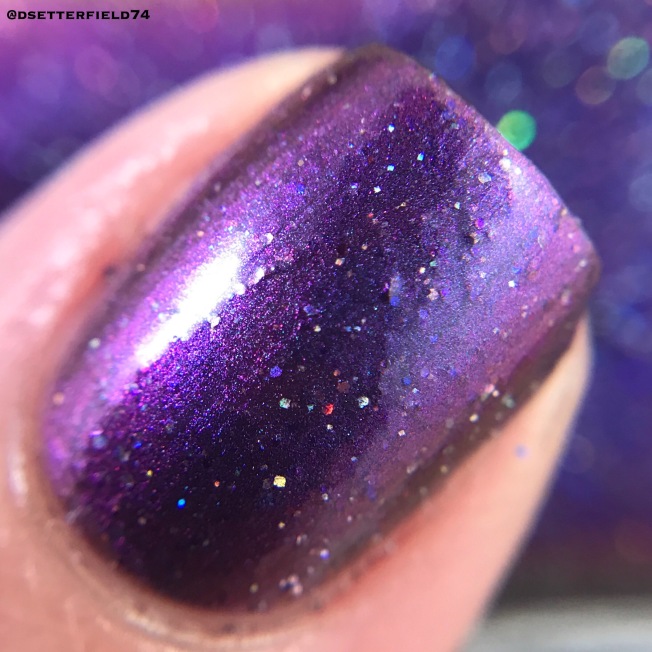 Sorry about this one: 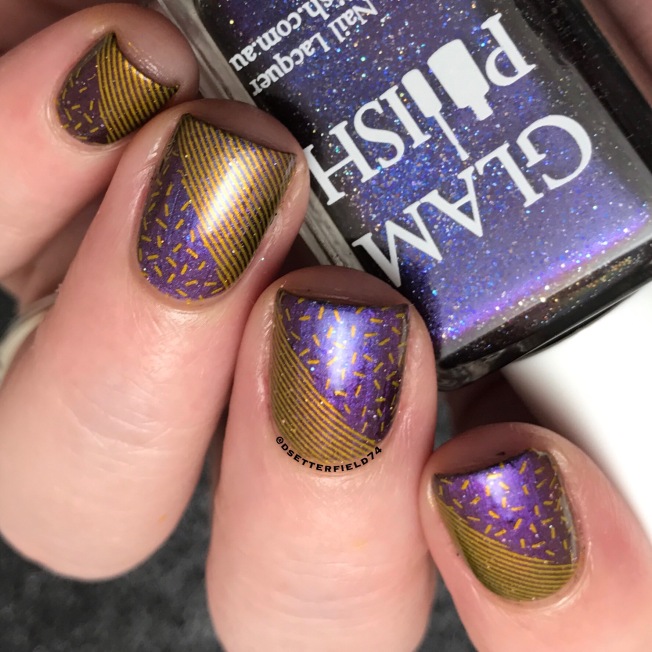 What can I say, it was 2 in the morning and my nose was running in a most unattractive way.  The fact it even exists is really quite the miracle.  Cuz even though I am sick and snotty and snorty and gross, I am also a dadgum professional who gets shit DONE.  Well, just nail shit, that is.  I mean, you read the top of this blog right?  You didn’t just jump in here in the middle like a crazy person? 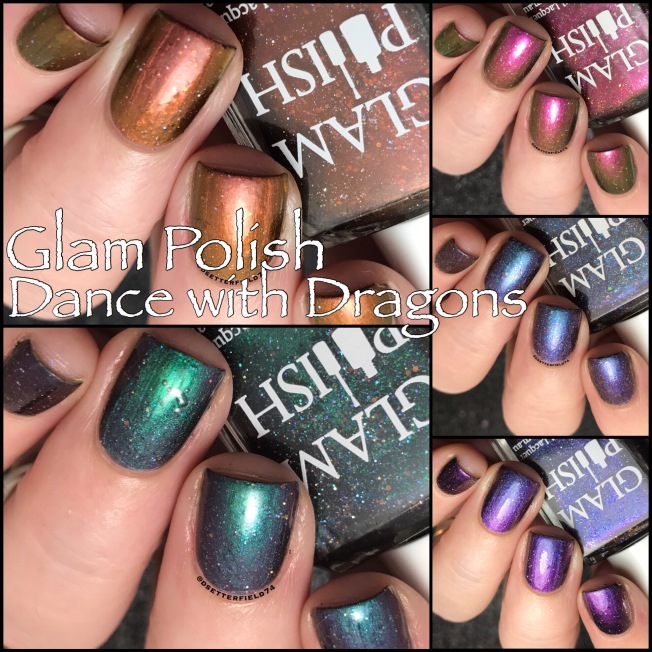 As mentioned before, I received 5 out of the 10 polishes in this collection.  Just for funsies, here is what else you can get:

Dark Wings, Dark Words – a sapphire/violet/red multichrome with all the glitters

The Mountain and the Viper – a sapphire/cyan/green multichrome with shifting multichrome flakies, blue/red shifting microglitters and those same glitters

Okay, someone got lazy about that glitter thing.  Not even sorry about it.  Maybe 2%.

To see swatches of the entire collection, take a look at my pal, Cheyenne’s, blog by clicking here.  Now once you are fully informed and adequately convinced, let’s spend some money:

Congratulations on your good decision.