Mama, I’ve made it. In case you want a really really good reason to be proud of your daughter (in addition to my degree in “secretary” that is), I am now a member of The Digit-al Dozen, an awesome group of super talented nail artists. And no, I didn’t have to pay to get in:  I was chosen.

Ahhhhhhhh! So it’s not like a Harvard or Yale situation or anything like that, but it’s PRETTY DANG CLOSE. And that’s in all caps so you know I’m serious. I’m the happiest of all things happy.

So what does this mean?  Well, in addition to my swatches and reviews of nail polish, I’ll actually get to show you some of my nail art, which I admit is few and far between on here. Every month there is a theme, and all of us post our themed manis once a day for five days. Which also means I will be blogging five days in a row, and that makes you excited. (It does; I checked.)

Not sure what layout or formula I’ll end up with eventually on how I’ll do these posts, so bear with me as I figure it out. This first week will be pretty basic, but hopefully the nail art you will love. 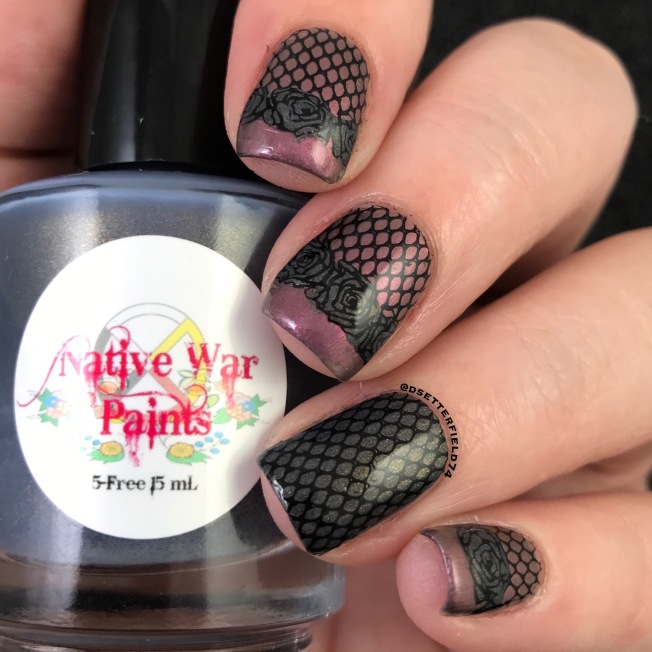 I hope the first thing you thought of when you saw that was VAMPY. Or actually, maybe you thought GENIUS! first, then vampy, which is also correct.

Here’s what I used:

Red duo chrome – Dainty Digits Polish Equinox, a polish that I swatched for you last week. I thought it was the perfect vampy shade!

Stamping – Bundle Monster + Yagala collab plate BM-XL208. I used the one image in two ways because every once in a while I can be resourceful. Buying 78 shades of purple nail polish is a moot point. Obviously.

Hope you enjoyed my first Digit-al Dozen post! I’ve got four more to share this week which I hope look just as vampy (or genius) as this one. In the meantime, click the button below to see the rest of The Digit-al Dozen vampy manis!