It’s Sunday, y’all, otherwise known as the last day to have booze in your coffee.  Make sure you take full advantage, cuz you’ve got five days ahead of you full of NO BOOZE regular coffee, which is quite possibly the lamest thing the Universe has ever done.  Well, that and business casual.  Seriously, was 7th grade Spirit Week NOT the best, most grade-A producing week ever, directly related to the fact you got to wear pajamas in public?  Let’s do more of that, then!  Pretty sure more spreadsheets get done while wearing a jumbo t-shirt and no pants at your desk.  OMG, an Employee of the Month award is lurking, guys, I just know it.

In the meantime, let’s look at pretty things!  Glam Polish is headed to the Polish Con event in Chicago, and these beauties are tagging along:

A bonafide flakie EXTRAVAGANZA!  Plus drool and noodle legs and other ladylike-type scenarios.

Polish Con in Chicago is coming up on September 23 so Rachel made this awesome Iconic Chicago collection exclusively for the event. Each polish is named after characters and movies from Chicago’s history, and I’ve listed them alongside each swatch. Cuz although I might be the most derpy-est person on the planet, occasionally I can also be a proper blogger – or at least make 18,000 attempts.

Here’s your color rundown. Brace yourself, cuz it’s about to get suuuuuper pass-out-y in approximately 2.5 seconds. Grab your smelling salts for SAFETY.  Lessss go!

KEEP THE CHANGE YA FILTHY ANIMAL 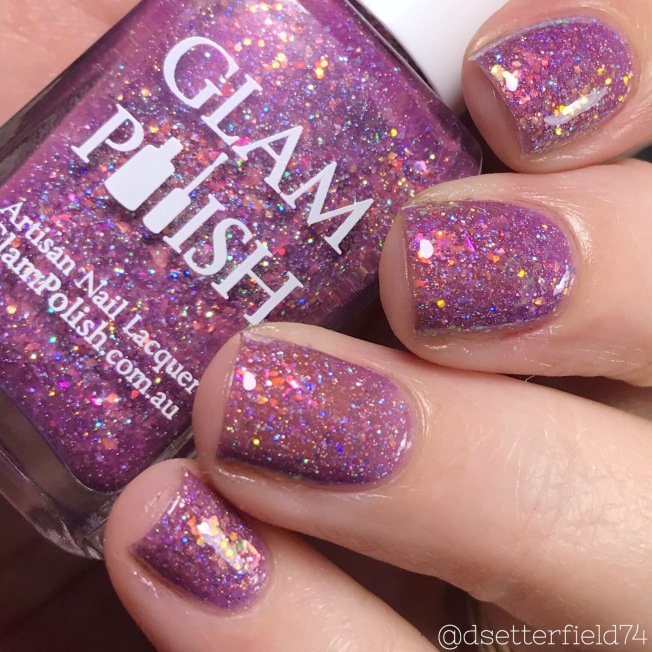 INSPIRED by a quote from the movie Home Alone

I did three coats on three fingers and BIZARRELY, just two coats on my ring finger.  I’m not even gonna tell you I was polishing with one eye sleeping, cuz quite honestly, you already know.  In any case, it looks pretty good in two coats but I believe three deepens the color somewhat.  Other swatchers got it opaque in two coats, though, so clearly I’m not very good at nails.  Bah. 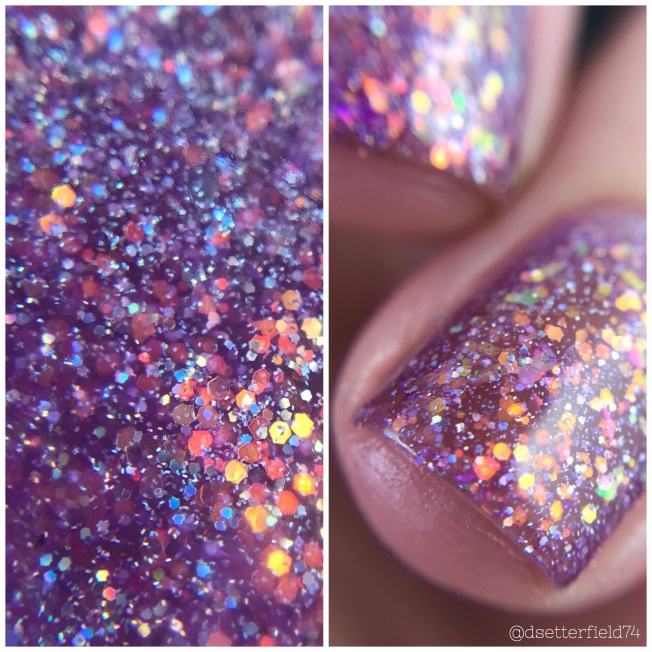 WE’RE PUTTING THE BAND BACK TOGETHER

INSPIRED by the Blues Brothers

Did two coats on ALL four fingers here, so I’ll take a horn toot if y’all not busy.  This one looks flat-out YUMMY, though; four nails of grape Jolly Rancher goodness.  Purple lovers, pay attention!  27 bottles in the shopping cart just makes sense.

ALL I DO IS SUPPLY A DEMAND

Only two coats for this one cuz suddenly we’re having a brief moment of mojo and things are working out perfectly. Of course, Glam’s formula is one of the best, most consistent formulas you’ll ever find, but in pure ME fashion, I tend to muck things up anyway. NOT THIS TIME!  Two coats and done. Weeee! 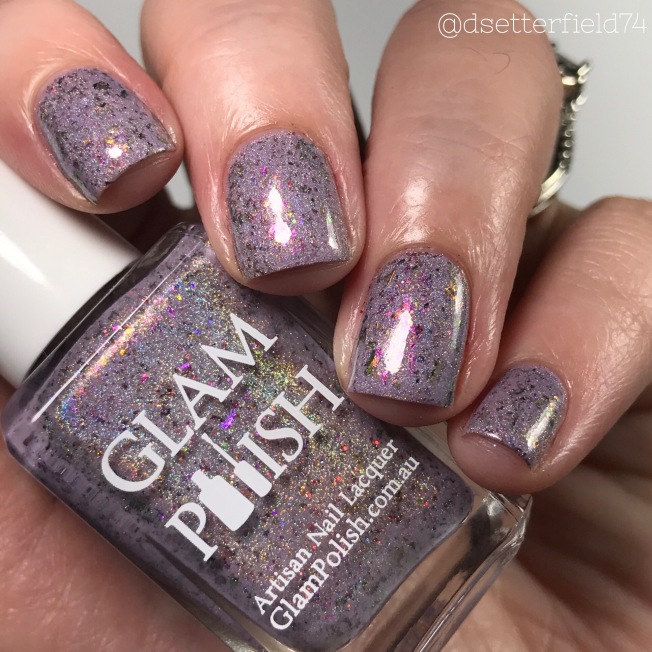 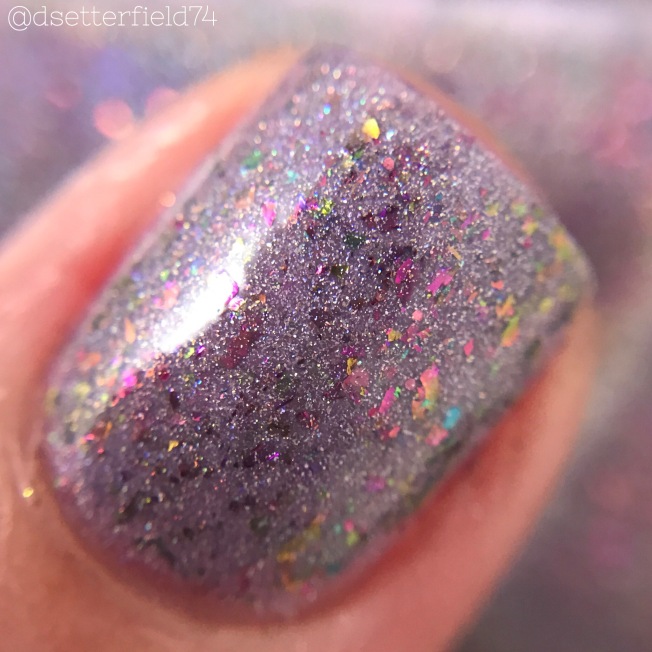 FLAKIE ON THE LAKIE 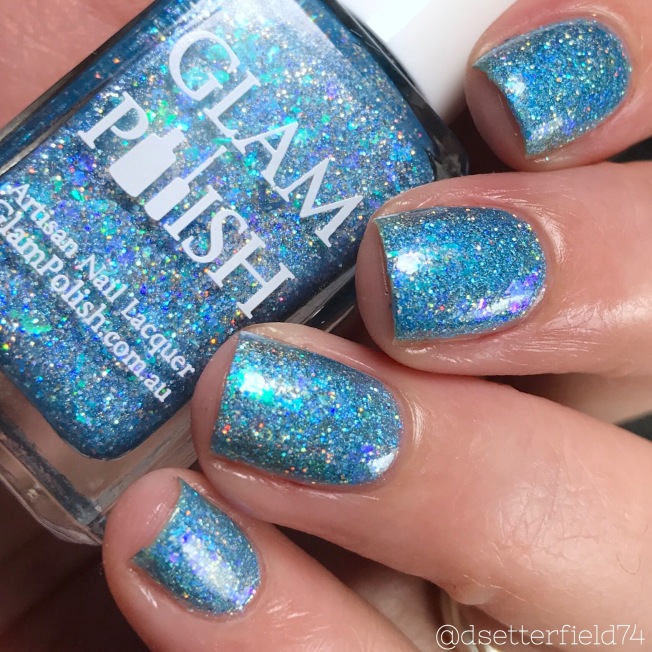 INSPIRED by Chicago in general; it was named by one of the members of the Glam Polish Facebook fan group

This one is my absolute favorite of the bunch!  Two coats of dreamboat, and I’m the most unattractive mess you’ve ever seen. But it glows, guys; it simply glows. And my brain has just literally left the dadgum building. 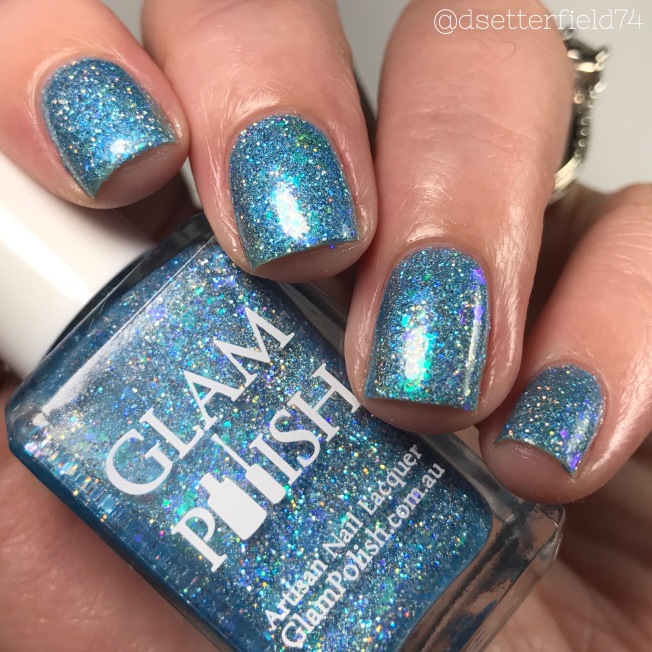 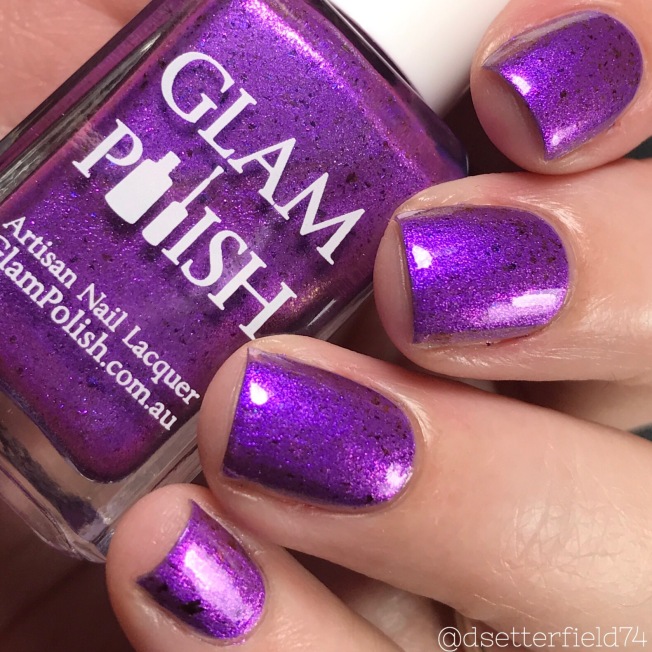 WAIT. Now this one is glowing. Ughhhhhhhh. At this rate, we’ll never make it to the end of this blog. How two coats of this ever made it on my nails is a damn near miracle.  Cuz it’s hard to do nails while melting into a big puddle of goo.

Purple lovers!  How happy are you right now? (VERY.) 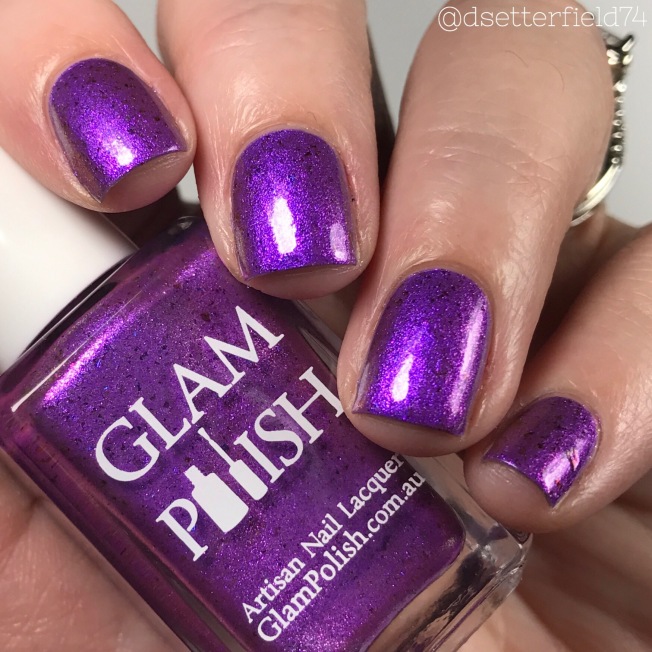 INSPIRED by a quote from the movie, The Untouchables

Oooooh, party nails!  Or napping nails, if you’re me. Regardless, two coats so you can polish and then move on with your fancy life. 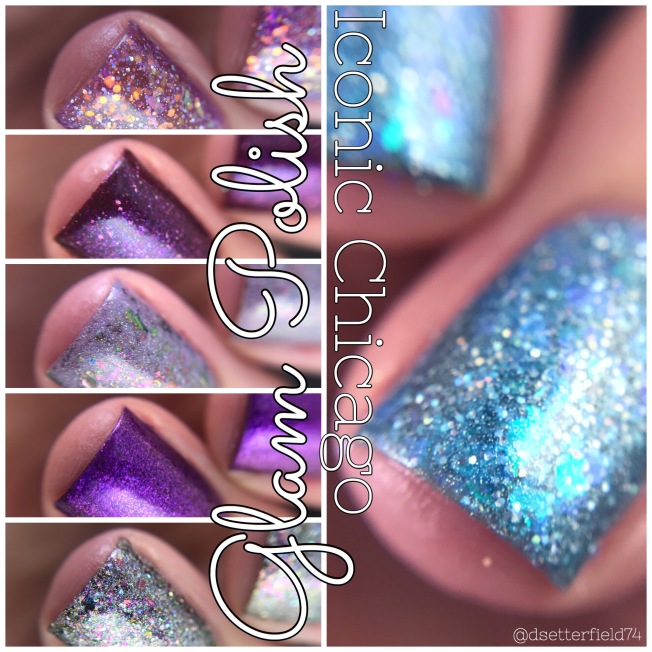 As I mentioned, this collection is made exclusively for the Polish Con event in Chicago on September 23, so if you’re heading that way, GET ON IT, BOO BOOS!  There’s a limited quantity available and you don’t wanna miss out.  If by some miracle there are leftovers, Rachel will put them in the Glam Polish store on September 29 at 2pm EST.  I know that’s roughly eons away with light years and eternities on top, so setting 17 alarms makes the most sense.

If you need tickets to Polish Con, you can buy them here:  http://polishconvention.bigcartel.com/information-about-events

If you need (to buy me) a Starbucks gift-card-of-gratitude, go here:  http://www.starbucks.com

You know, just in case you’re in a clicking mood.

To sum up, Polish Con go-ers are the luckiest people in the world.  However, the rest of us might get our chance!  Be sure to follow Glam Polish on all their social media for updates.  Cuz if leftovers are happening, who’s going to be first in line?  EVERY DADGUM ONE OF US, that’s who.  The linky loos:

To keep up with all things Polish Con, join the group by clicking here.  And then get back in pajamas cuz GOOD LORDT all the clicking!  Y’all can officially lounge on couches for the rest of the day.