I’ve stared at this empty blog for approximately 18 years cuz it is physically impossible to write stories with the TV on.  I don’t even care what show it is.  My husband could be watching a documentary about snakes who eat people – and as terrifying and nightmarish as that is, I will end up watching it.  With my eyes closed, but still.

Current status:  the Thanksgiving episode of Full House circa 1987 and Uncle Joey’s got his tongue stuck in a Coke bottle.  Well, what more excitement do you need on a Tuesday night?

I have two new beauties from Lucky 13 Lacquer to share with you today.  Take a look: 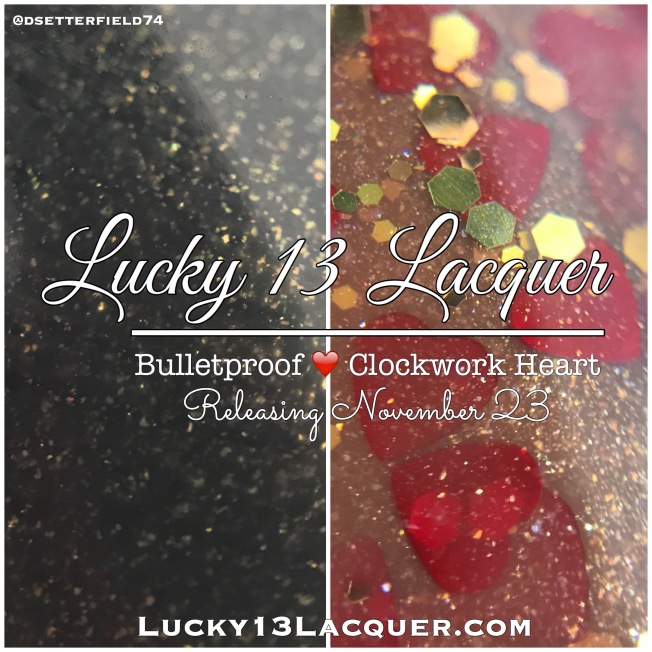 Looooooooove.  Dark and mysterious on the left, and one of the most unique polishes ever made on the right.  You’re excited! (Oh, yes you are.)

This is one of those polishes that make me feel bad about my own lack of creativity.  Isn’t it one of the coolest things you’ve ever seen?  As soon as I unwrapped it, I immediately shoved it under my husband’s nose:

ME:  Look how gorgeous this is!  OMG, just LOOK.

He is zero fun.  At least when I’m forced to watch one of his football shows, I give him high fives when something good happens.  What I’m high-fiving for is lost on me, but that is beside the point. 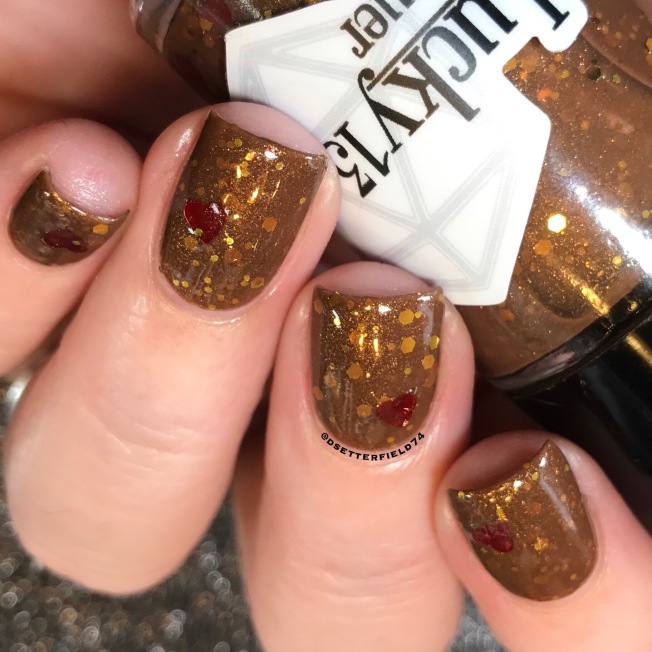 Clockwork Heart is inspired by steampunk culture, which makes this polish even more cool.  It has a delicious shimmering cocoa brown base and loaded with gold and caramel hex glitters and (my most favorite part!) red hearts.  I won’t lie:  I could eat this.  I mean, I won’t, but don’t say the words cocoa and caramel and expect me not to think about for a couple seconds at least.

Macros to swoon over:

You’re getting this, by the way.  I’ve decided.

Next release is this one called Bulletproof: 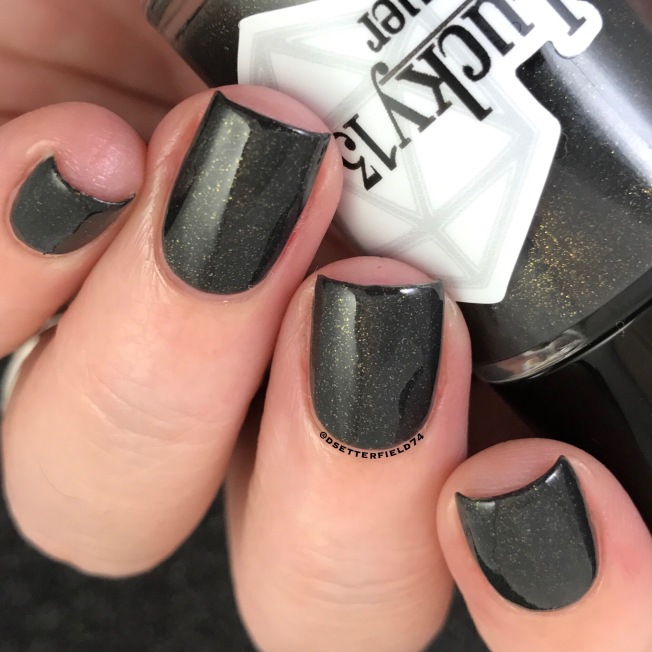 Inspired by Marvel Comics’ (and now Netflix show) Luke Cage, Bulletproof is a charcoal grey base with lots of sparkling golden shimmer.  I’m totally loving this!  I’ve always been a fan of dark polish, but adding in an unexpected, contrasting shimmer is definitely preferred.  I mean, why have a donut with no sprinkles?  Or a hand with no Starbucks?  There is no logical reason for any of it, so we put gold shimmer in grey polish because that’s the natural law of the universe.  And you just can’t argue with that.  Cuz, SCIENCE.

Both polishes release on November 23 – which is probably today by the time you read this.  Not sure of the exact time, so keep checking the site.  Click here, my friends!

In addition, Lucky 13 Lacquer is having their annual 25% off Almost Everything sale.  Starting tomorrow (today) (November 23) (ugh, whatever) and running through Monday night (the 28th, so you can put your calendars away), plug in code: TOFURKEY at check out and save some money!  Works on everything except the new stuff.

Lastly, I don’t have pics of anything because it’s currently en route to me, but there is a collab box available tomorrow too.  It’s inspired by Tim Burton’s Nightmare Before Christmas and includes an exclusive Lucky 13 Lacquer polish, a bottle of their matte top coat, perfume from Hepatonics, two lip balms from Geek Fire Labs, and nail vinyls from Nail Jewelry Bling. Be sure to check it out.  I’ll have photos on my Instagram soon.

Okay, I’m trying to find a less awkward way to end this post, but Friends just came on and now I can’t concentrate.  Someone needs to come turn this TV off.  I’d do it myself, but that’s okay.  Pajamas.  You know.