Back a few months ago while scrolling through Instagram at 3 a.m., I stumbled across a picture of the Love Lula beauty box.  It comes from England.  For one, the internet needs to be shut down in the middle of the night because it becomes a very very dangerous place.  And two, I should stop thinking everything from England is adorable cuz before you know it, I’m buying a pre-paid three months subscription without a second blink.

So here is my very last box: 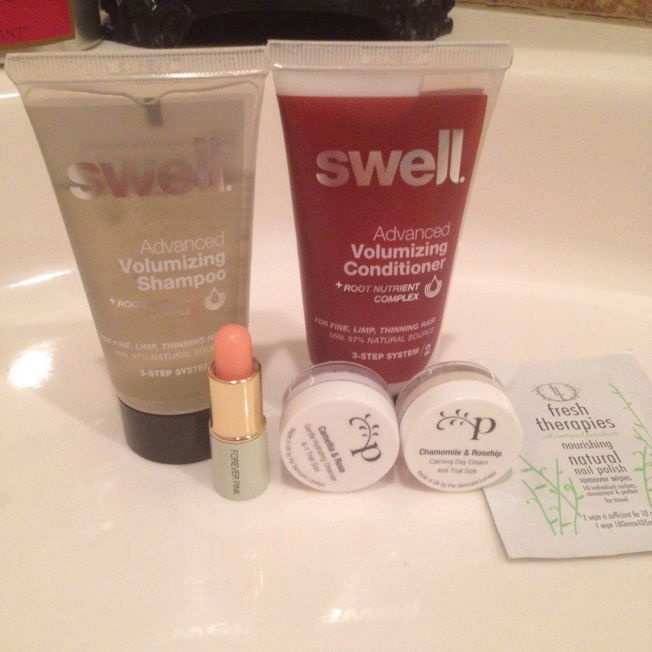 Yes, two pictures because I was bathing when I unboxed it and left the packet of lotion on the edge of the tub.  Really shouldn’t multitask.  I did another unboxing in the bath tub last night, and I ended up fishing paper confetti out of the water for about 15 minutes.  Bath time is lazy time; I should know better.

Anyway, the products.  I got some shampoo and conditioner by Swell.  Apparently it’s part of a 3-step system, but I was unaware of what the 3rd step was as they’d only sent 1 and 2.  Why would you leave out the 3rd book in a trilogy?  How are you supposed to know how the story ends?  Who will Katniss choose, Peeta or Gale?  You get my point now.  My life is hanging in the balance now that I’ve shampooed and conditioned but didn’t do whatever else I needed to do in order to complete the circle.

Of course I look it up.  Step 3 is a root nutriet complex.  You spray it on your roots.  I don’t want that.  I’ve had bad luck with root things.  Most specifically in the sticky-up hair, dirty film left behind kind of way.  Maybe this one doesn’t do that, but I can’t be bothered about it now.  I freaked out for nothing.  Oh well.  Carry on.

An itty bitty Jane Iredale lip and cheek stain is next.  These samples are so funny, because if we say sample, by God you get a sample!  But in all honesty, I’ve never been that in love with a lipstick where I feel I need an enormous tube of it.  So I’m perfectly fine with this baby size.  Only problem is if I throw it in my purse, I may never find it again.  As for the color, it’s one of those self-adusting pink shades.  I’m not a huge fan of this style, but I will say this yields the prettiest pink I’ve ever had.  And the texture is very moisturizing and soft.  I like it y’all!

Speaking of teeny tiny samples, look at those two PAI skincare ones.  We’re on a roll now, aren’t we?  Both of these are thick, almost solid consistencies that melt into your hands as you rub them together.  I liked that aspect very much.  The cleanser lasted two rounds – and what can I say about a cleanser other than the texture and its function? – but the day cream is still going strong about five rounds in.  You need a small amount because once it melts it spreads pretty good.  And as the product starts to sink into your skin, it leaves behind a lovely velvet softness.  I think I have about one more use left, which actually makes me a little sad.  As sad as empty moisturizer can make me, that is.  Cuz y’all know how much I love throwing things away.  (Var var much.)

Another one of those boring things: nail polish remover.  This time it’s the Fresh Therapies version.  I got a wipe pouch, and then also a vial of the liquid remover.  The vial did not survive intact on its merry ol’ jaunt from England.  Not to worry, nothing leaked, but it did separate itself from the little booklet it was strapped to, and I couldn’t trouble myself with fixing it for a picture.  Which is why it’s not shown.  Another example of my incredible laziness, as just sitting the vial down next to the wipe packet poses too much of an exertion issue.  No wonder I’ve gained 10 pounds in a year.

Last item is a packet of John Masters Organics body milk in the Blood Orange & Vanilla scent.  Now THIS is the smell I’ve been looking for.  It smells what I imagine Heaven to smell like – orange dreamsicle ice cream.  I actually would have appreciated a deluxe sample of this instead of a one-time-use.  Now if it smelled like anything else un-food-related, I would’ve taken a nap right in front of it.  You see how I operate now?  Here’s an easy equation for you:  Food = good; other = hideous.  Works in almost any situation.

Now that my 3-month subscription is over, I debated on whether to sign up again.  Sadly (well, depending who you ask), I have opted not to.  There was some shipping issues with this box (March never came so they sent it again, but then I got 2 April boxes and still no March), and issues of any kind stress me the ef out.  So I’m gonna end it here.  If that doesn’t prove right there what a responsible human being I am, I don’t know what will.

Let me tell you a little story about the Love Lula box.  I was laying in bed about two in the morning, and I had just canceled my Beauty Box 5 subscription.  I was a little heartbroken, because even though I never really liked the products I got in my Beauty Box 5, I still enjoyed the process of opening the box.  I could have consoled myself with my normal bowl of ice cream, but instead I found Love Lula.  And just like that, my heart was healed.

If anyone tries to tell me my 11 beauty box subscriptions isn’t emotional therapy, I will karate chop them in the throat, complete with a hiiii-yaaaa! and spitlets.

Before you rush out and get your own Love Lula box, you must know it comes from England.  They do not have a monthly subscription option for U.S. customers (at this time), only a pre-paid three month one.  And once the currency was converted, the monthly charge came out to be roughly $29 per box.  So it’s not necessarily cheap, but I wanted another damn box and thought one coming from jolly ole England might be super fun.

I can convince myself of anything.  I subscribed in about 2.5 seconds.

My March box is out there floating in the ocean somewhere (probably) but my April box showed up about 11 days after they shipped it.  They are in the process of sending out another March box, just so you know.  Customer Service is top notch.  I didn’t catch one hint of annoyance at my 15 emails inquiring about the whereabouts of March.  What happened in real life could have been one major eye roll and angry typing (verging on all caps), but I’ll never know.  Us OCD types can be quite obnoxious, I won’t lie.

Here’s what I got for April:

I’m not going to pretend all this was worth the $29 I paid, but just staring at that adorable little lip balm package makes it almost worth it.  But first things first – that blasted one-time-use packet.  It’s a Jane Iredale Glow Time BB Cream one.  The envelope it was stuck to said it comes in 6 shades, but the packet doesn’t have a color listed on it so I have no idea what shade it’s in or if it would even come close to matching my skin.  The website says it color-adjusts, so I’ll just hope for the best.  Apparently the texture is what they lovingly describe as “velvet” and that makes my cat ears perk up instantly.  (Cat people will understand what cat ears are.  If you aren’t a cat person, what is wrong with you?)  I’m super big on texture, so anything that claims to be velvet definitely has my attention.

Got a couple samples of Sante shower gel in the lemon and coconut scents.  I’ve used the lemon one already, and it had a nice smell.  But what else can you say about a shower gel?  It performed like a shower gel.  No scrubby bits, just a shower gel.  Hopefully you’re getting my picture because carpal tunnel is about to set in.

As for that super cute package of lip balm, I just about abandoned my entire box and locked myself in the bedroom with just this lip balm.  I’m such a sucker for packaging.  You could be selling slug trail, but if it comes looking like it stepped out of a 19th century European apothecary, you can put all your money on the fact I’m buying it.  Seriously, all your money.  That’s how much packaging means to me.

Now this Figs & Rouge lip balm isn’t from the 19th century, but it is European.  It’s more of a girly chic motif, which also excites me to no end.  Plus, the flavor is Mocha Orange and I’m like whaaaaaaa…??  Let me put this in perspective for you.  You know how at Christmas or Valentines you get a box of assorted chocolates and sometimes there’s a map of flavors but sometimes there’s not.  And when there’s not, you’re eating chocolate all willy nilly, biting into a coconut, a caramel, or one of those truffle things, nodding and making lip-licking noises because you’re so incredibly happy you’re beside yourself with joy (but no manners).  But then you bite into one that’s filled with orange cream and all your daydreams are destroyed in the blink of an eye.  Well, that’s not me, not even close.  I am of the rare minority who would scissor off your pointer finger for a bite of the orange cream ones.

What am I going on about?  I dunno.  I just love the smell of chocolate and orange and this lip balm makes me happy.  The end.

Next item is the black kohl eyeliner from UNE.  They are a French company so instantly I’m interested.  I used this liner the other day, and it is nice and creamy and applied smoothly.  But it is also the third black eyeliner I’d gotten in a beauty box this month so I was kind of like ho hum pigs bum.  I mean, I’ll use it because it came from France and all, but it doesn’t excite me to the point of madness.  That’s all I’m saying.  Moving right along.

Last item in the box is the REN Rosa Centifolia Express Makeup Remover.  At first I was like, yay a new makeup remover because I’m a big fat makeup dork.  I thought it was a liquid; however, instead it’s a cleansing milk.  I don’t like putting lotiony textures on my eyes.  They feel goopy to me, and dangerous.  Because I’ve never wanted to open my eyes and look all around me as if I had never seen any of it before quite like I do when I’m forced to have my eye closed due to a goop/eyeball impending doom scenario.  Why is that exactly?  Am I a 3 year old child?  But for the sake of science I did put this goop on my eyeball.  Did not enjoy, but I survived.

So there you have it, my first Love Lula experience.  One of these days my March box will appear, and then I will have a May box to review as well.  Not sure if I will sign up for another round because $29 and the agony of waiting for my box to sail across the Atlantic Ocean sometimes is just too much to bear.  But we’ll see.  I’m finiky and change my mind a lot (due to the aforementioned 3 year old child disorder).

In the meantime, have a great Thursday.