Not me, but someone, probably. 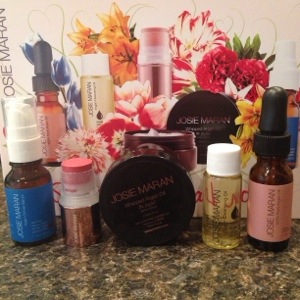 I’ll admit, I was tempted primarily because of the floral packaging.  I was not enticed much by buying a box full of argan oil.  However, since it’s here, we’ll make the most of it.  There is a hair oil, which I will use on my ends as I’ve been doing for almost a year now; a cheek and lip tint, which is a pretty pinkish coral; a whipped body butter in the Vanilla Apricot scent, which I haven’t smelled yet, but I can only imagine it is kittens with angel wings floating on clouds; a cleansing oil, which has been used and it works pretty good breaking down makeup but the smell could use some assistance; and their claim-to-fame product, argan oil, which I’ve also used a couple times and was just okay with.

See what packaging does to you?  You buy things you don’t really want or need.  Because I really didn’t want more oil stuff.  I have plenty to last the rest of my life.  But since someone put this in a kit and boxed it up all pretty-like, I immediately MUST HAVE!  In fact, it becomes quite a one-track-mind situation and I won’t rest until I have it in my hot little hands.

Having said that, I do think the cheek color looked nice on me and I will absolutely get use out of it. And the body butter too.  So was it all for naught?  No.  Purchase = justified.  Next!

Whoever came up with the Kohl’s Cash promo deserves a reward, because it is genius.  My hubby and I bought some luggage a few weeks ago (like responsible grown-ups) which earned us $60 in Kohl’s Cash.  They might as well have told me I won the frickin’ lottery, as much as that excited me.  Sixty dollars?!  Oh, the mind was turning already.

Well, apparently, my husband assumed half of that was his because we’re in the store and he’s gone off to shop.  I’m sorry, what?  Since when does he go shopping?  Since Kohl’s gave us $60 for free, that’s when.  I’m trying very hard to let it go, since technically it’s only fair (according to etiquette books; I looked it up), but there was all this emotional turmoil happening and I was on the verge of poking somebody’s eye out.  I mean, I wouldn’t, but I was on the verge.  The very very verge. 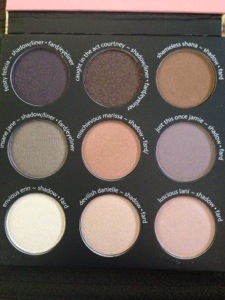 This is the theBalm Shady Lady palette.  Pretty neutral purples, grays and browns.  I now own every theBalm palette they are currently selling, so I feel like I’ve completed a collection or something.  Which is a time to celebrate (by sending gift cards) if you ask me.  This palette came with a sample tube of the Put a Lid On It eyeshadow primer.  I used this over the weekend and I like the texture very much.

At this point, my purchase has totalled $40.  I honestly don’t know what hubby is going to do with the $20 I’ve left him.

Next thing I picked up is this eyeshadow duo by Simply Vera Wang: 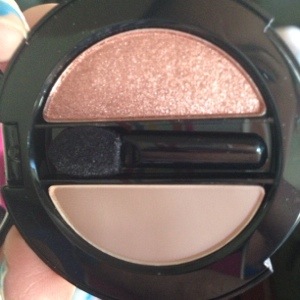 This is duo #409 and is a matte rose with a coppery rose metallic.  They are really pretty, but honestly, they looked better in the pan.  I paired it with a cool brown crease color (Bobbi Brown matte shadow in “Toast”), but it looked all muddled together.  I’m going to try again though, do a gray or a purple in the crease for a better contrast.  Maybe do a black on the outer V for further contrast.  I’m very into contrast if you can’t tell.

So now we’re up $20 more dollars, and my purchases officially total $60.  I have no idea what the hubby is going to buy with no money left.

Remember about a week ago when I said I was trying to ignore myself from thinking about purchasing the Chanel Vitalumiere Aqua foundation?  Look how awesome that turned out: 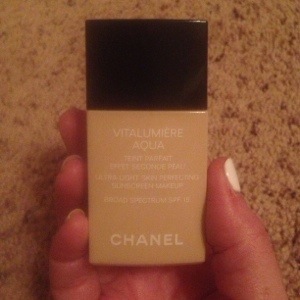 Well!  I’m very happy right now and that’s all that matters.  I’ve been wearing this foundation all week, and I’m just in love right now.  It’s so pretty, the color is a good match, and it’s also Chanel.  As in Chanel.  I’m an extremely shallow person.

I’ve bought yet another kit of travel skincare to take with me on my trip to Chicago next weekend.  At this rate, I’m going to need another carry-on. 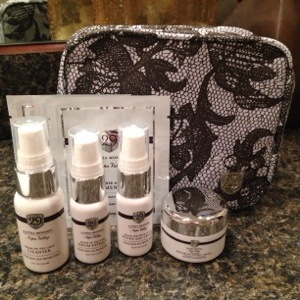 This is the 29 Cosmetics kit that I got at Target.  It includes a cleanser, serum, day cream, night cream and three toner pads.  I wanted this kit primarily because I have no travel-friendly toner – all mine are over the 3oz maximum.  So naturally, I had to buy an entire kit of stuff.  This makes perfect, logical sense to me.  Don’t even try to argue.

Last batch of goodies is this haul from Beauty.com: 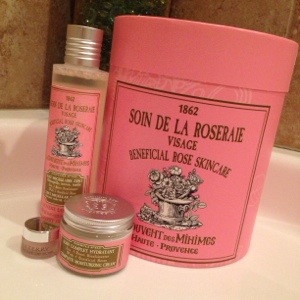 I got an email from them saying they have free sample jars of the cult classic By Terry Baume de Rose lip balm, and that they’d send me one if I buy $25 worth of stuff.  Well, number one – call your product a “cult classic” and my cat ears perk up immediately.  Number two – that lip balm is $60 in it’s full-size form and I’m almost certain I’d never buy it because it’s freaking lip balm for $60.  And number three – I don’t own anything from By Terry.  Okay, done!  I’ll sign up.

So you can see in the picture my itty bitty baby jar of lip balm.  Isn’t that the preciousest?  I’ve used it a couple times, and the texture of the balm is very soft and lovely.  Definitely a rose smell.  Not hint of rose, essence of rose, or aura of rose.  It’s ROSE.  If you don’t like that smell, don’t buy this.  I feel it’s very nourishing to my lips though.  I’m testing it out (in a very scientific manner) to see if it will keep my lips from peeling every single day.  If it does, I don’t care if it’s $60, I’m buying the full size because that right there would be a dadgum miracle.

Now for what I bought in order to get the free sample is the prettiest packaged thing I’ve ever gotten.  It’s a skincare duo by Le Couvent des Minimes, also in a rose theme.  I got the micellar water (fancy name for toner) and the moisturizer.  Do I need this?  Is the sky blue?  Don’t ask stupid questions.

Well that’s all for now.  Thanks for hanging out with me once again.  I do have another batch of goodies to share, but that’s for another day.  I also have 4 boxes waiting on my porch right now, and I can’t concentrate for shit.  Have a great evening everybody!