Considering the fact I’ve been in here blogging nonstop like Leonardo was standing there at the end of it, you’d think I’d be good and caught up and in the middle of a couch-lounging Full House EXTRAVAGANZA! by now.  Except NO.  The To-Do List is just sitting over there, multiplying itself like some kind of rude magic trick, all while I’ve skipped lunch hour nap time in an attempt to be a proper blogger and post things early for once.  Do you see all this efforting?  DO. YOU. SEE?  Seriously, if a Starbucks is coming, I’ll take a thousand.

Since we’re in a bit of a time crunch and I’ve already wasted 18 hours writing one paragraph, let’s jump into some polish. I received more swatching stuff from Painted Polish to review for you today, and if you’re in the mood for some glitter and holo and general yummy deliciousness, well then you’re about to have a VAR VAR GOOD DAY.  Take a look at what you’re buying:

Good job. Seriously, if you came here for the ladylike composure, you’ve picked the wrong day. Ultra drool-y scenarios coming up in 3 … 2 … 1 …

This is the Polish Con limited edition Midway Merriment trio, a beautiful set of coordinated polishes in a pink, navy and gold color scheme.  Orrrrr, straight happiness poured in a bottle!  If you’re looking at these and somehow manage to NOT close your eyes and smile to yourself like an idiot, well then I am very sad about your brain.

DESCRIBED as a white crelly loaded with light pink, gold and navy glitters both matte and holographic, Sideshows & Snow Cones is my absolute surprise favorite.  Cuz it’s white and it’s a crelly and those two things are scary sometimes.  But Lexi has the most AHHH-MA-ZING crelly formula – like, I think there’s actual science in there – and this baby is smooth and creamy and levels out perfectly in two beautiful coats.

DESCRIBED as a clear base loaded with those same light pink, navy and gold glitters, Fairs & Funnel Cakes is the glitter twin to Sideshows & Snow Cones.  I did one coat brushed and one coat sponged and look how well the coverage is!  I did spend eons picking stray glitters off my skin, but that is beside the point.  Cuz sometimes I’m just not very good at nails. 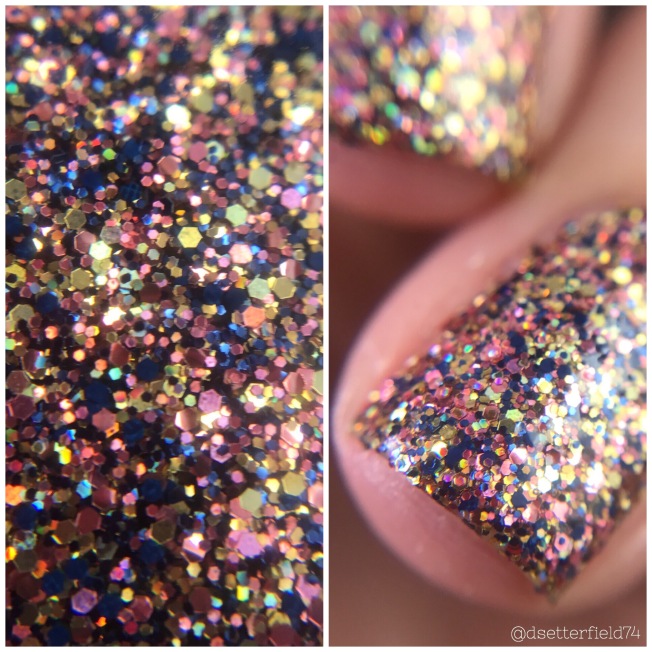 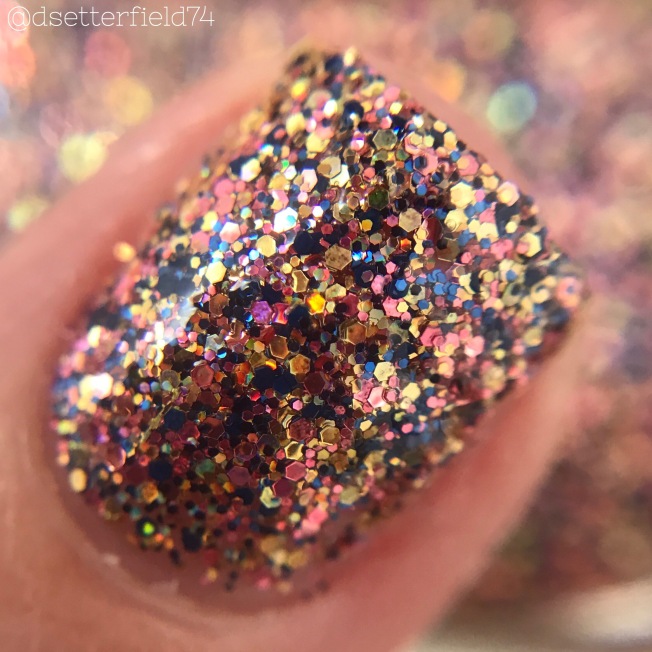 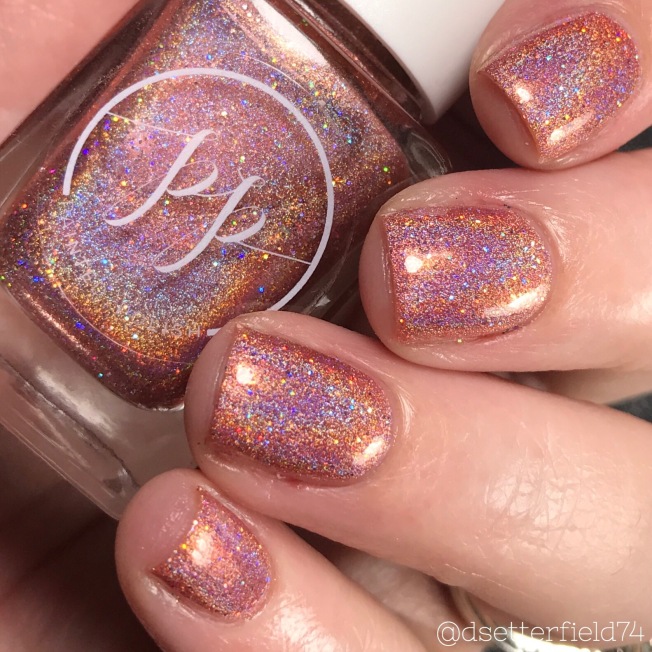 DESCRIBED as a rose gold ultra holo with added silver holographic glitters, Carnivals & Cotton Candy is just a prelude to the noodle legs you’re having later.  Cuz how swoon-y is this?!  Gah!  Those of you heading to Polish Con need to stop by Lexi’s table and toss a bottle in your basket. And some back up bottles in case you lick all over the first one. As happens from time to time.

I did three coats for my swatch just to deepen the color as much as possible.  Two covered fine though, you know, in case you don’t spend 17 hours sitting around painting nails like me.  Although WHY NOT?! is the actual question. 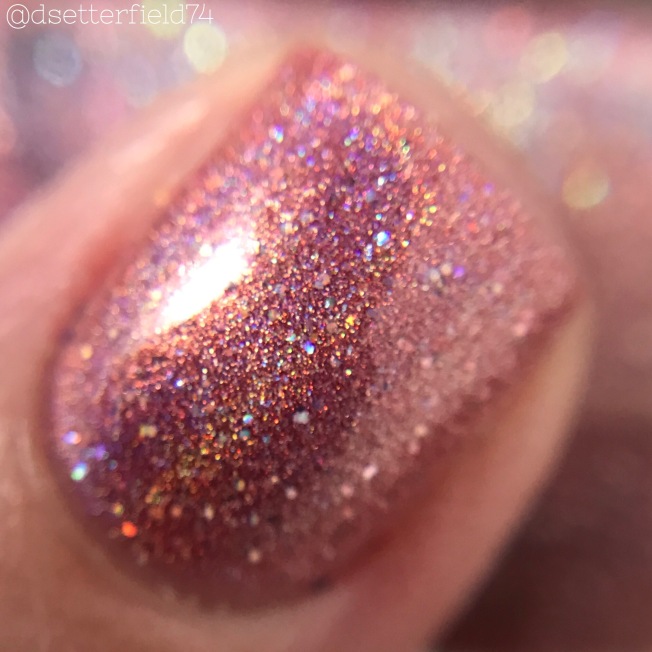 And now, A BONUS!  A few weeks back, Lexi released this gorgeous blue dreamboat as part of the Road to Polish Con series.  It’s no longer available online; however, she is bringing a limited number with her to Polish Con.  Who just peed a little?  ME TOO!  I swear, all pretenses of sexy officially went out the dadgum window.

FROM THE PIER, WITH LOVE

DESCRIBED as an ultramarine blue holographic with silver galaxy glitters and a pink/purple shinmer, From the Pier With Love is such a stunner! That pink shimmer peeking through?  DEAD.  And the sparkle out in the sun?  Complete freaking driving hazard.  Don’t ask me how I know.  Potholes are stinkin’ everywhere, though, in case you’re curious.

YOU GUYS. Don’t make me tell you what to do. Just toss this in your shopping cart cuz you were planning on it anyway. And now we are best friends, and you can continue to read this blog 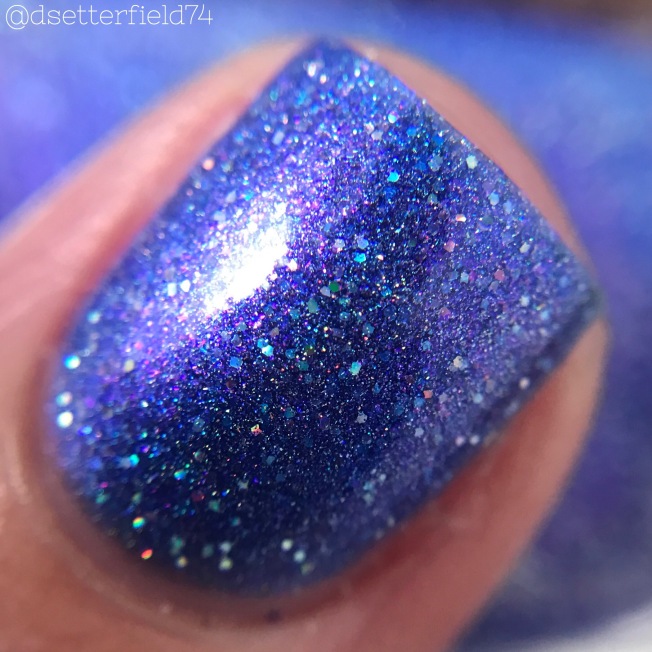 If you’re headed to Polish Con in Chicago, make sure you’ve added these beauties to your shopping list.  And don’t forget, the Road to Polish Con shade is in limited quantities, so if you want it, you know what to do. Someone’s gettin elbow jabby!

And thennnnn! The online release is set for October 1 at 6pm PST.  The trio for sure; the RTPC one will be if there’s leftovers.

I don’t currently have prices, but I’ve made an inquiry.  If/when I find out, I’ll edit this post.  PROFESSIONAL BLOGGER EXTRAORDINAIRE?  I say YES.

EDITED TO ADD:  Prices!  The Midway Merriment trio retails for $28 for all three. If you want single bottles, they retail for $10 each except for the rose gold holographic – she’s $12 cuz FANCY.  Also, the Road to Polish Con shade is also $10. But happiness?  FREE.

And now, some clicking opportunities! Connect with Painted Polish: