Remember that time when I was the monthly designated blogger for the Polish Pickup and I blogged so much, my hands literally just fell off my body in a carpal tunnel-y rebellion-type EXTRAVAGANZA!?  For a girl who lounges on couches for a living, that was an insane display of effort, and I’m quite certain at this point I can stop with the pants and the productivity and the moving of the legs and whatnot.  Cuz once you hit Doing Things, LEVEL EXPERT, it’s 37 years of pajamas and Starbucks and hubby bringing back snacks from the kitchen.  Who’s writing this blog then?  Seriously, I don’t even know.

And now somehow 30 days or so have passed us by, and the August Polish Pickup is officially lurking. What?!  Did July last like 4 seconds, or what?  I swear, time needs to STOP IT with the overachieve-y or else winter will be here soon, and I’m not interested in that one bit.  Cue the hives, I can already tell.  Blah.

But no more chatty.  I have a huge slew of pretties to get through this week, and if I want to attempt to be a proper blogger, then now is not the time to take 18 years.  Cuz FOR SOME REASON, the Polish Pickup only lasts 4 days and if we all wanna have an anxiety attack to the trillionth degree, well that sounds about right.  Here’s the contribution from Top Shelf Lacquer: 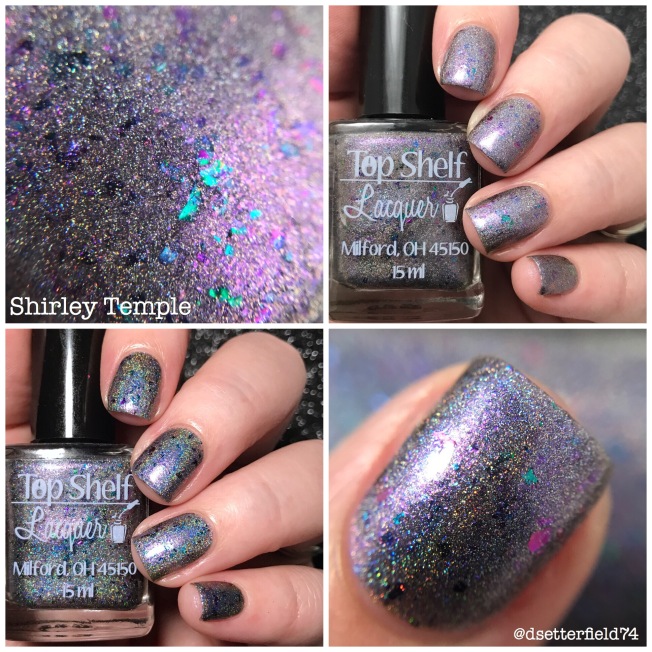 The theme for the month of August is Old Hollywood, which is only unfortunate due to it’s surprising lack of Leonardo.  I know he’s not really Old Hollywood per se, but I think if you played Jack Dawson in Titanic, Howard Hughes, one of the Three Musketeers and a man who pretended to be a pilot to get free rides on airplanes, well quite simply … you get a waiver.

This is why I’m not in charge of things.  Cuz clearly, I need supervised.

And then this beautiful thing happened:

My photos don’t even do it justice, but did y’all see flakies?  Squeeeeee!  We’re officially about 2.5 seconds away from noodle legs, so let’s move on before unattractive things happen.

DESCRIPTION:  A silver linear holographic polish with a strong purple shift and loaded with color shifting flakies that change from purple to blue to teal to green

Under the lamps, HOLO say heyyyyyy: 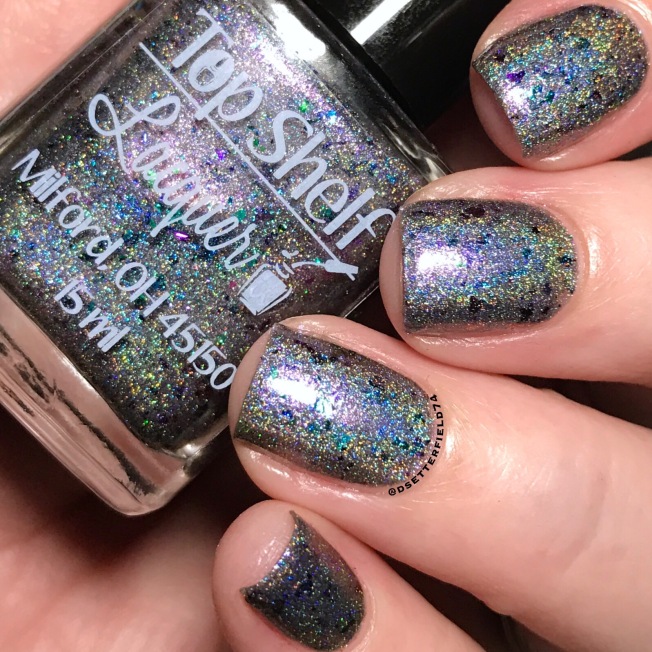 Then I added a matte top coat for funsies:

Another angle, which I swore looked completely different from the first picture, but in reality it’s most definitely different by at least 17 millimeters. You know, VASTLY DIFFERENT is what I mean.

And here’s where our brains completely stop working: 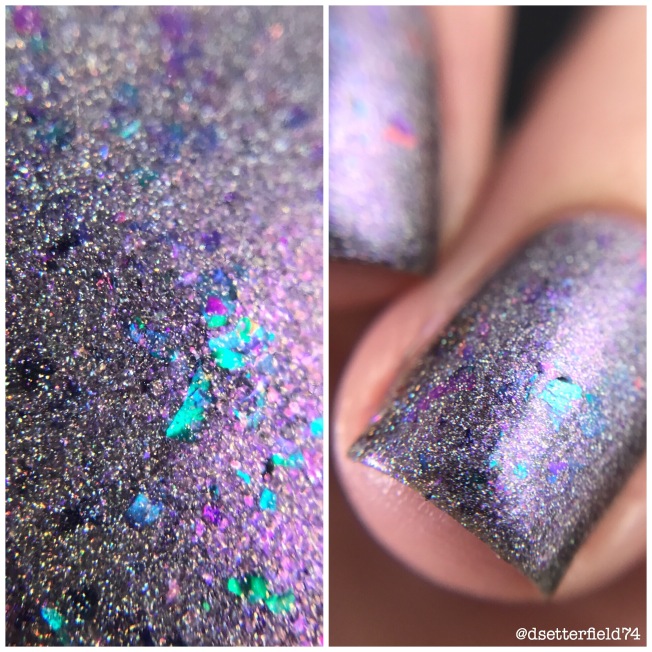 So about this Polish Pickup thing, I’ll give you a brief rundown of talking points:

WHAT: 42 indie polish brands all coming together for a one-stop shop event; you buy one or all, it’s up to you! Flat $3 shipping no matter what.

If you’d rather read the more eloquent version, click here for the FAQs from the PPU website.

The prices will vary from brand to brand, but Top Shelf’s Shirley Temple will retail for $12. Although a billion dollars would be fine too. FLAKIES, guys. Flakies.

To join in the fun of future Polish Pickup theme nominations, voting and sneak peeks, click here for the Facebook fan group. DO IT. I’m serious.