I am an impulse buyer.  I rarely get anything on sale cuz I want what I want when I want it.  Waiting until it goes out of season so I can buy it at a discount is like telling me Leonardo is coming and then forcing me not to run and grab the wedding dress.  Seriously, who has that much control over their bodies?  I mean, I once went to Jamaica and came home with a suitcase full of Rasta man pencil toppers and I don’t even know how that happened.  The lure is too strong, and my brain just goes away somewhere.  Cuz I don’t even use pencils, much less need 18,297 eraser hats with little dreadlocks on them.

Something just comes over you.  About 5 years ago, I walked into a dealership out of curiosity and accidentally bought a car.  Like, I wasn’t even trying to, but things just spiraled out of control. It was chaos on the level of little 9-year-old me outside in the backyard saying cuss words to myself:  a bit exhilarating, a bit naughty, a bit like freedom.  Driving away that night in my brand new car, I asked myself “Does this thing even have cruise control?” cuz I honestly, LITERALLY, didn’t even know.  And – surprise, surprise! – it DIDN’T have cruise control and I had to drive around in it for the next two years with my foot on the gas pedal like a crazy person.  Ugh.

Some super pretty beauties from Anchor & Heart Lacquer are up on the blog for you today.  The latest installments of Taryn’s monthly Message in a Bottle series have arrived, so let’s take a look at June, July and August.  See below! 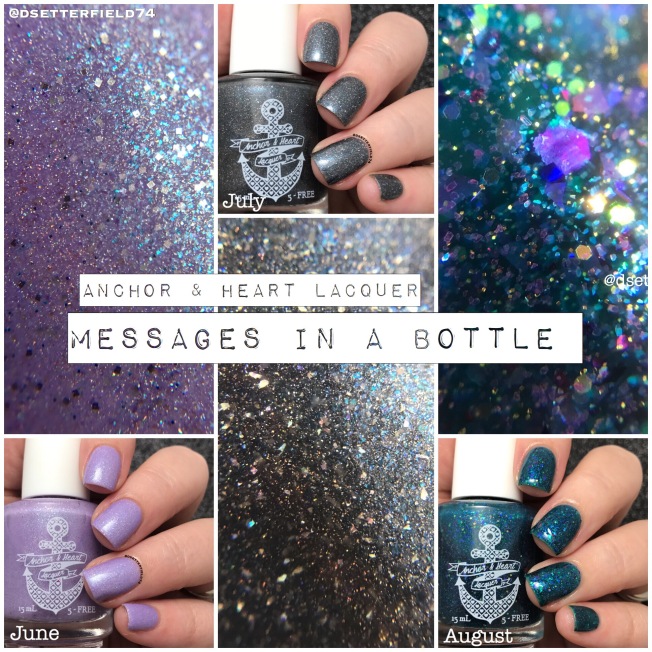 Gah!  Taryn, look what you made!  A sparkly, holo-y, tongue lolling EXTRAVAGANZA!

The Message in a Bottle series is a set of monthly polishes each named after an empowering message of love, confidence and self acceptance for all women.  It’s such a fabulous idea, and one well worth supporting.  Cuz who couldn’t use something kind and uplifting and nail polish-y from time to time?  EVERY DADGUM ONE OF US, that’s who.

First up for the month of June, here is Say Yes to You:

Look, jaws are dropping everywhere!  You think it’s just a purple, but NOT EVEN CLOSE.  It’s a purple with it’s jazz hands on, and you want it on all your surfaces.   (Completely logical reaction, just so you know.)

But check out this macro: 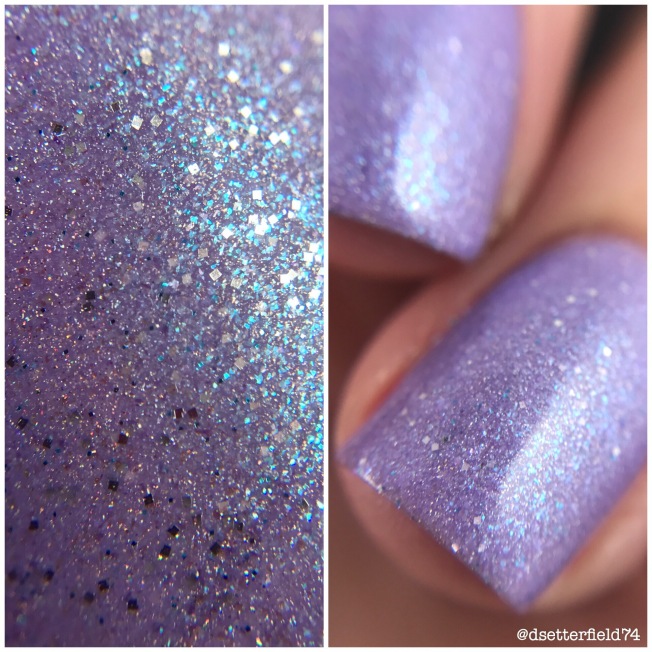 Brain’s already stopped holding my mouth closed.  I’ll be a damn mess by the time we get to the bottom, I swear it.

One more for funsies: 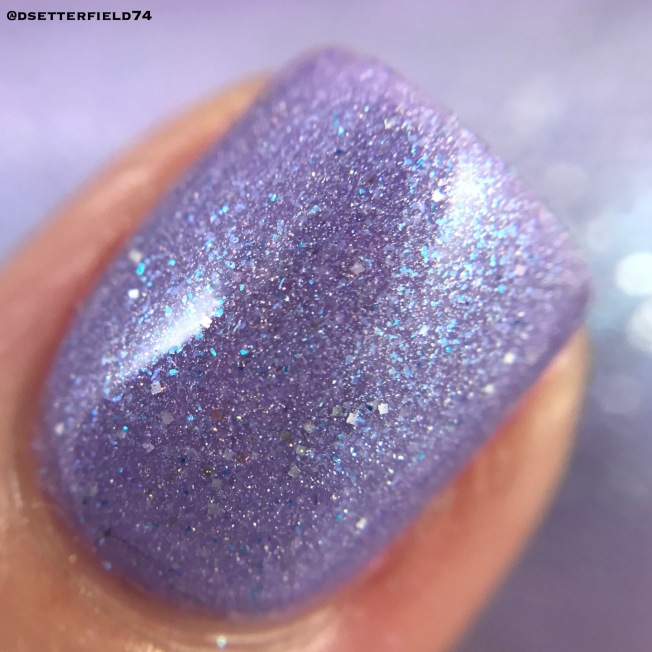 Holo (dead).  Flakies (more dead).  How the rest of this blog is getting done, we will never know.

Next up for the month of July, here is Stronger Than Yesterday:

If you like dark polishes, this one has your name alllll over it.  (Seriously, I checked.)  And then you go tossing in a blue shimmer like no big deal, and suddenly wallets are flying out of purses everywhere.

An insane display of pretty: 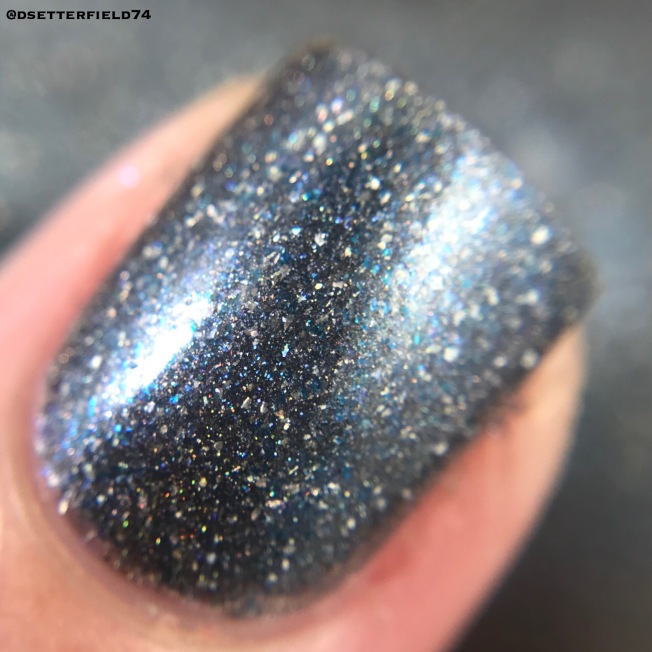 Yep.  We’re all about to spend some money today, I just know it.

Lastly, for the month of August, here’s Sparkle On, Darling: 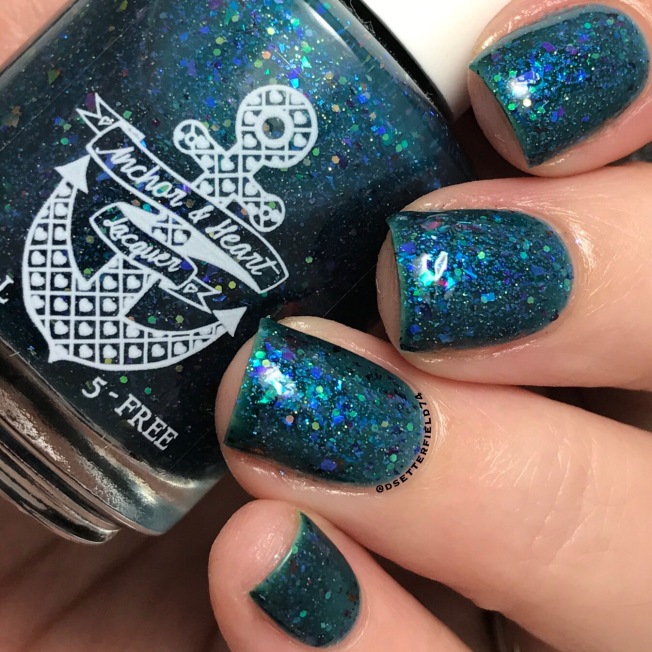 COATS:  Three, a bit sheer on the first but builds nicely

And now, my faaaaaavorite. The glitter got me, guys. They got me real good.  Ladylike composure = officially out the dadgum window.  It’s a real epidemic over here.  No cure. 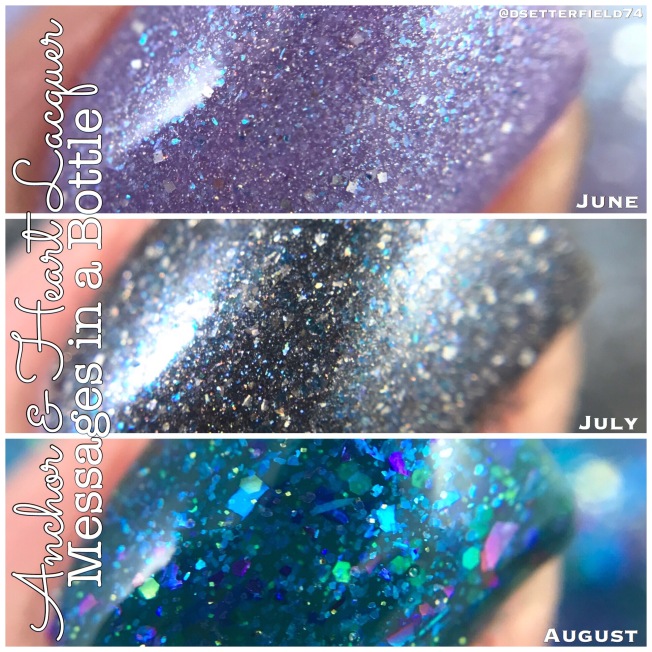 There are 8 polishes in the series so far and all are available now.  Price for these three is $11 each, but a few of the older ones are $10.  Might as well go start yourself a collection then, so all 8 in your shopping cart sounds like the least you can do.  Plus 27 backup bottles, for safety.  I mean, you don’t get to Crazy Nail Lady by being rational.  Click here for shopping!

And now, the linky loos!  Connect to Anchor & Heart:

A basket full of kitties, just because.