Well guess who’s behind again?  Ugh.  Things were going so smoothly, too.  I mean, the effort on display was Blogger, Level EXPERT to say the least.  Then I sat down on the couch and my brain done went away somewhere.  Someone turned Full House on, and SUDDENLY! responsibilities are for other people.

I don’t even know what it is about that dang show.  It’s on in the background while I am swatching and blogging – it’s become my routine at this point – but then Uncle Jesse breaks both arms and tries to feed himself cereal with a ginormous wooden spoon and officially I. AM. DONE.  Whatever else I had to do that day:  deleted AND cancelled.

Seriously, if you feel like wasting an extraordinary amount of time, I have pointers.  If I can put this much enthusiasm into other, more interesting things, I might be President of the Universe by now.  Pajamas for everyone!

But now we’re back on track, so everyone get your focus face on.  I received a huge haul of polish from my girl Amy with Top Shelf Lacquer, and if you’re into multichromes, holo or pretty things in general, you’re about to have your best day ever.  Get ready to spend some money, yo.  Justification starts now.

Amy sent over three of her gorgeous multichrome quads, and opening the box was like a choir of angels singing.  If Leonardo popped out next, we’d all be like YUP, sounds about right.  Cuz this is some good stuff, man.  Amy’s multichromes are a one way ticket to the Drool Convention, at the minimum.

Let’s start with the Fun Bar Quotes – Holo’d quad.  I’ll give you the rundown of the colors, then I’ll meet you at the bottom (or else we’ll be in this blog for the next 18 years).  First up is Bad Decisions Make Good Stories – Holo’d:

This one is a red jelly base with a yellow to pink, orange, red, copper and green shift with a linear holographic finish.  I’m trying hard not to chat, but it’s already sweaty in here.  Gah!

You want this, oh yes you do.

This one is a super sparkly almost glittery shifter that goes from aqua blue to purple to red with flashes of copper and green in a purple jelly base with a linear holographic finish.  Two coats of dreamboat!  Photographing all the shifts in a multichrome is hard, but hopefully I’ve done them justice.  An attempt was made, so that deserves at least half of toot on the ole horn, pretty sure.

Also, macro skills aren’t too shabby.  Is an award coming, or … ?

Now we have Drinks Well With Others – Holo’d:

This one is also a super sparkly almost glittery shifter that has the most dramatic shift from green to blue and purple with flashes of red and copper in a slightly tinted jelly base with a linear holographic finish.  This one is soooooo much more stunning in person; it is LEGIT a shifty queen.  Might be my favorite.  Might end up on all the surfaces.  Mine AND yours.

Macro, a prelude to the 27 bottles you’re buying: 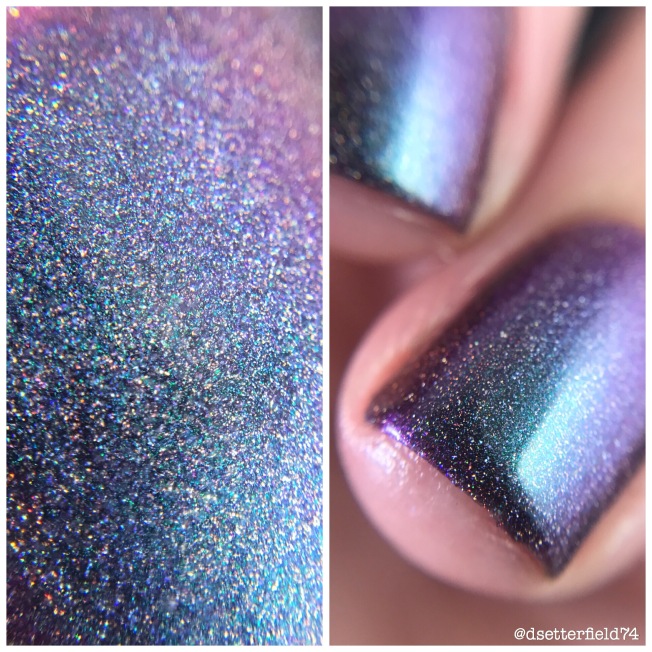 If we make it to the end of this blog it’ll be a damn near miracle.  Cuz not much gets done when you’re busy dying every 15 seconds.

Lastly, here’s Why Limit Happy to an Hour? – Holo’d:

Another super sparkly almost glittery shifter that goes from red to blue to purple with flashes of copper and green in a purple jelly base with a linear holographic finish.  At first, this one looks somewhat similar to Take Me Drunk, I’m Home but then you realize it’s a different toned purple.  I’d show you a comparison, but I don’t plan things very well.  I am a DADGUM PROFESSIONAL, clearly.

Macro, to aid the convincing:

You’re buying these, but then again, you already know.

Next collection to show off is the Cocktail Fun quad.  Check out these straight multichrome masterpieces:

Remember back in April when I swatched the Multichrome Madness group customs, and they were four of the most spectacular things you’ve ever seen?  Well, these are those same customs but without the cute square glitters.  And I tell you what:  I stinkin’ LOOOOOOOVE them.  Plain multichromes?  Heart eyes times a billion.

First up is Schnapp To It: 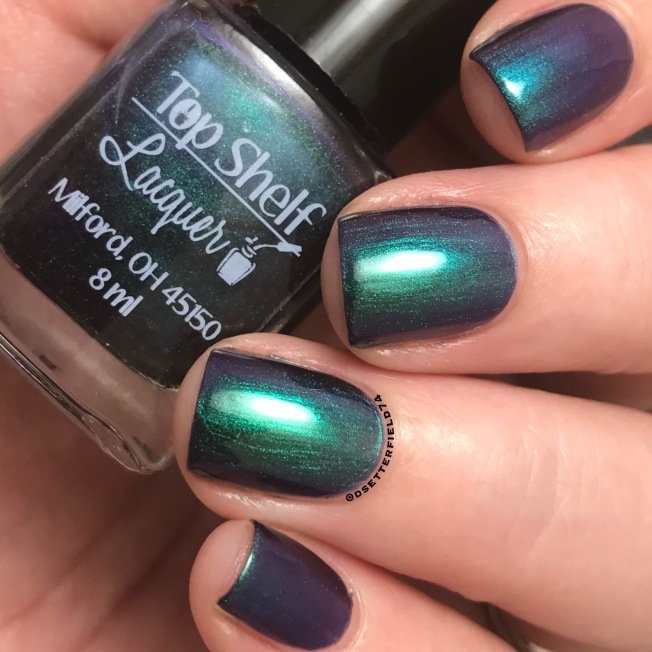 This one shifts between green, blue and purple with an occasional flash of red in a tinted jelly base, and basically I’ve just lost all control of my body.  Bad case of the noodle legs plus the brain’s stop holding my mouth closed.  OMG, am I still married?  I don’t even know. 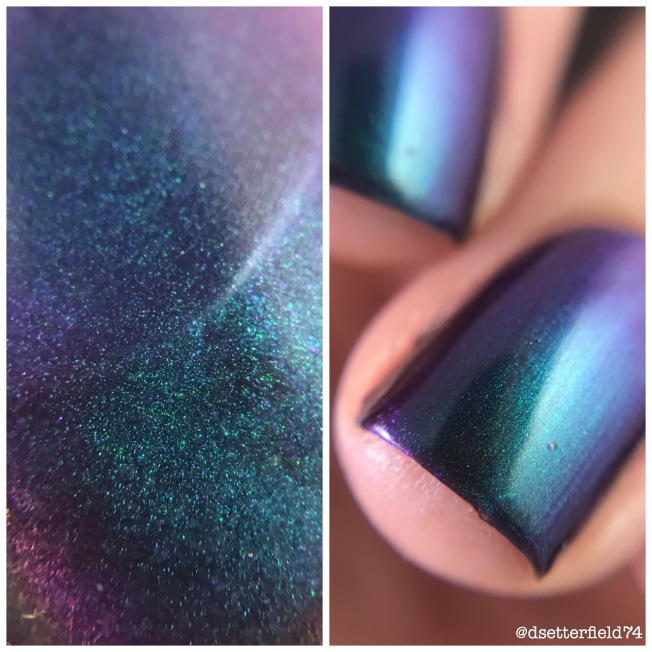 Mercy.  Words have officially left me.  It’s moan-y throat noises from here on out.

Next up is Now Watch Me Sip … My Chardon Nay Nay: 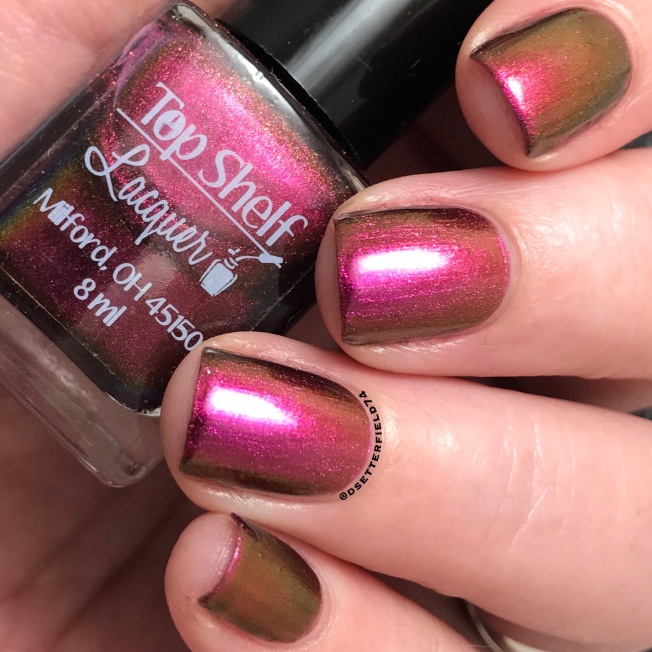 This one shifts between pink, orange, gold, and green in a tinted jelly base.  Isn’t this just the most beautiful burst of color?  Amy is a magician, I’m almost certain.

An insane display of pretty: 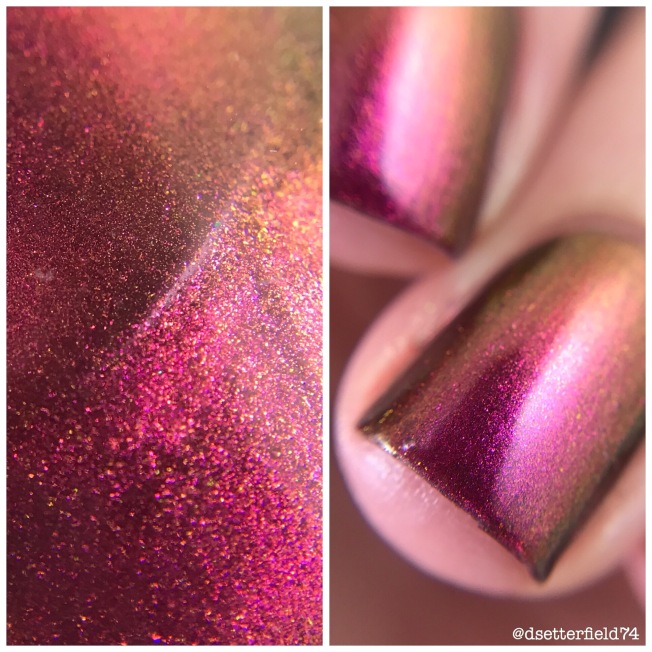 Seriously though.  The noodle legs. 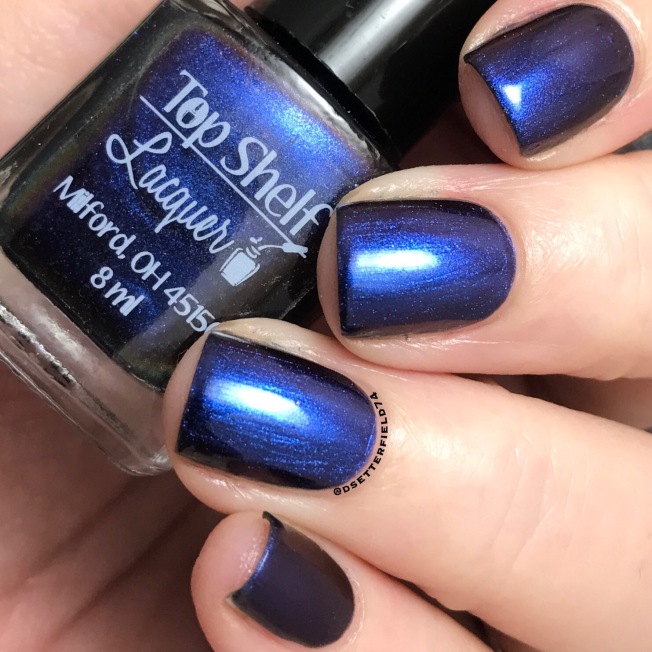 This beauty shifts from blue to purple to reddish in a tinted jelly base.  All you blue lovers, this one is calling for you.  Most likely in a French accent and handing you a Starbucks. 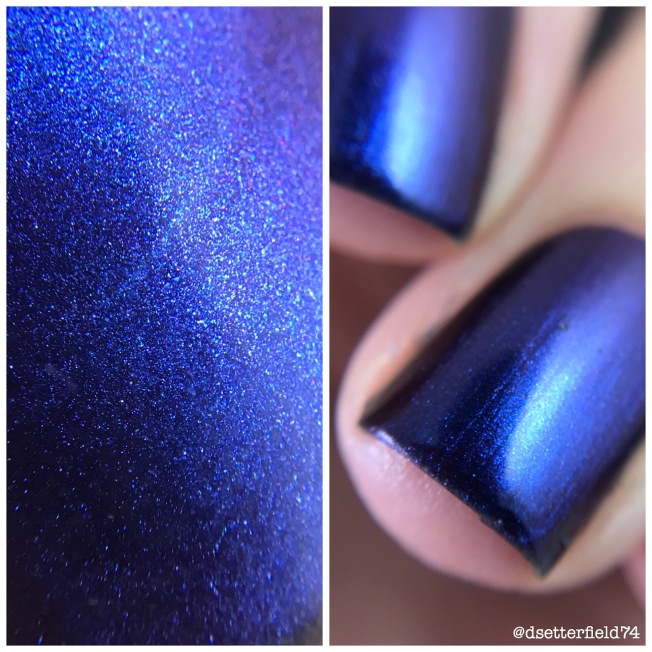 Are you still upright?  Nope.  Me neither.

This one shifts from purple to red to bronze in a tinted jelly base.  Such a rich and glorious jewel tone!  The shift in this one is slightly more subtle than the rest, but then again I sprained my foot by stretching too hard on the couch, so I tend to do things in a VERY WRONG kind of way.

Macro, to seal the deal:

The last collection I have is the Cocktail Fun quad again, but this time with holo:

GUYS.  More polish you’re buying!  Cuz turning your back on all this magic is not an option.

First up is Schnapp To It – Holo’d:

This one shifts between green, blue and purple with an occasional flash of red in a tinted jelly base with a linear holographic finish.  If you’re sticking your fingers in stranger’s faces soon, no one’s surprised.  Cuz why act normal at a time like this?

Close up of those goodies:

Holo holo everywhere, and in the cart she goes!

Next we have Now Watch Me Sip … My Chardon Nay Nay – Holo’d:

This one shifts between pink, orange, gold, and green in a tinted jelly base with a linear holographic finish.  So freaking yummy!  I won’t lie: I kinda wanna eat this one.  But I won’t, cuz SOCIETY.  The judgy eyes are everywhere.

Dang.  What is the point in life if you can’t lick some polish every once in a while?  I ask you, WHAT IS THE POINT?

Next up is Tequila Mockingbird – Holo’d:

This beauty shifts from blue to purple to reddish in a tinted jelly base with a linear holographic finish.  For me, the holo hid the shift a little bit so I think I prefer the straight multichrome version of this one.  HOWEVER, I continue eating whole bags of Funyuns (in a room by myself), so my opinion might be moot.  You decide for yourself, lovies.  I’m just gonna go sit back down now.

Still dreamy no matter what. 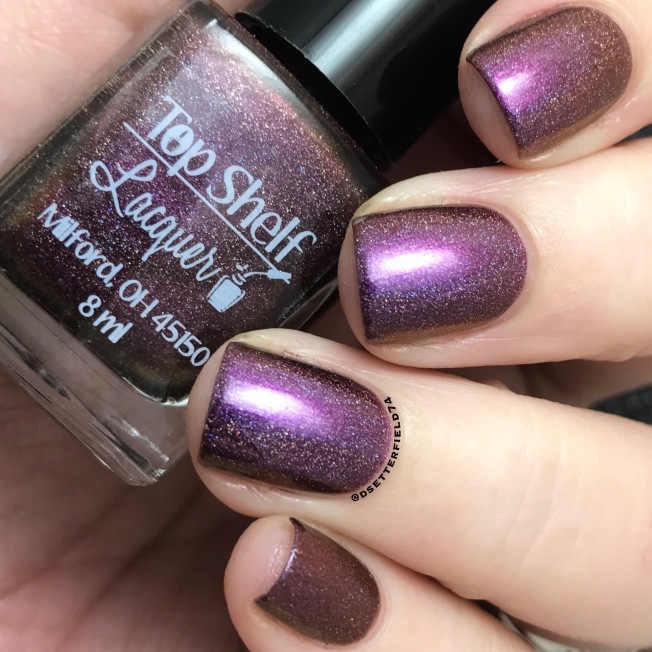 This one shifts from purple to red to bronze in a tinted jelly base with a linear holographic finish, and if you’re thinking I must be an unattractive mess by now, YOU ARE CORRECT.  There’s only so much sexy to go around while holding a drool bucket.  Hubby just needs to look away for a minute so we can stay married longer.  I mean, the traditional 5th anniversary gift is WOOD, so pretty sure he’s about to build me a boat with his bare hands straight from a Nicholas Sparks novel – and hell if I’m missing out on that.  Although a popsicle stick rendering of the Titanic with a little toothpick Leonardo on top would be just fine too. 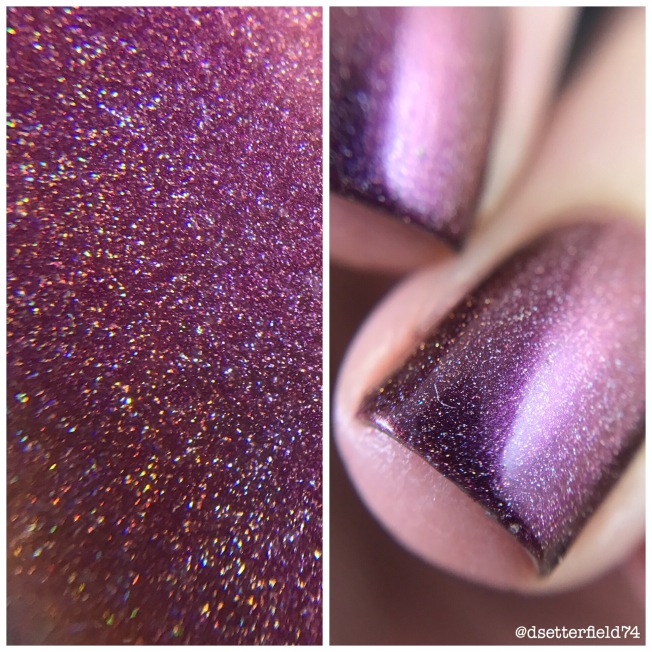 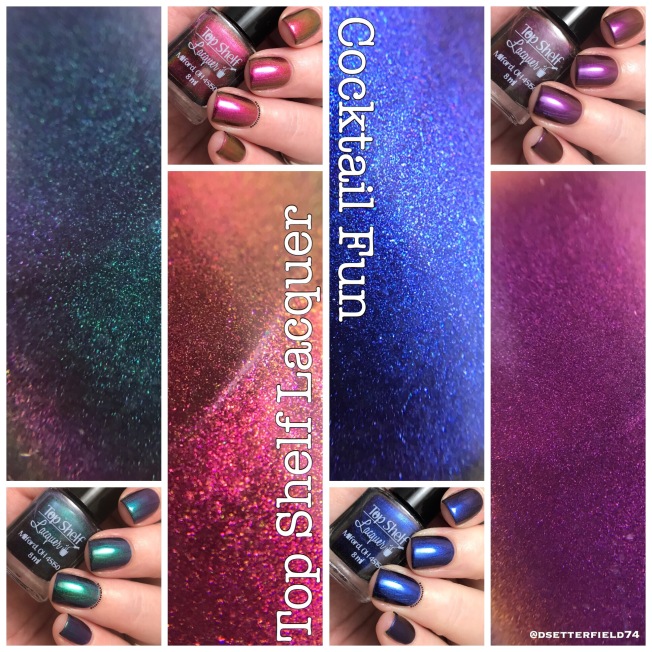 And the best news?  It’s all available now.  Click here for shopping, then stalk your mailman like a proper loon.  What other choice do you have at this point?

Also, I’m serious about toothpick Leonardo.  I told hubby, and he laughed.  BUT HE IS WRONG.  So very very wrong.