I swear, if I scroll Facebook one more time and then SNAKE! happens without any warning, I’m gonna karate chop someone in the throat. Cuz I don’t need to see what you find out in your backyard while mowing. You need to be indoors in pajamas like a normal person.  How will you ever get to Lazy, Level EXPERT by being overachieve-y anyway?  Blah.

In Michigan last week, hubby made me go “do stuff outside” and RUUUUUUUUDE doesn’t even begin to describe this scenario.  I mean, I’m on VACATION, so clearly exercise has nothing to do with it.  But because I made him stop for 15 “eternity-like” seconds at the Michael Jackson birthplace in Gary, Indiana, that means I owe him favors of all shapes and sizes, and apparently hiking was one of them.  Ugh.

GUYS.  I am the world’s girliest hiker.  Everything was either a snake, spider or poison ivy.  And there was dirt, and IT. WAS. EVERYWHERE.  I got a bit of it on my cute Sketcher tennies, and I was seriously done for. Do people cry while hiking? I mean, is that a thing people do?  Just asking. You know, for a friend.

Got a lifetime’s worth of calisthenics done, though, and even if I wanted to take off my wedding ring and hand it back to hubby, I couldn’t cuz my fingers were ultra sausage-y at that point.   But on the even bigger plus side:   DADGUMMIT, I did it.  And only complained about 97.85769% of the time.  Toots on the ole horn for me then.  Woot!

Here’s a photo of me pre-hike, exhibiting composure to the trillionth degree: 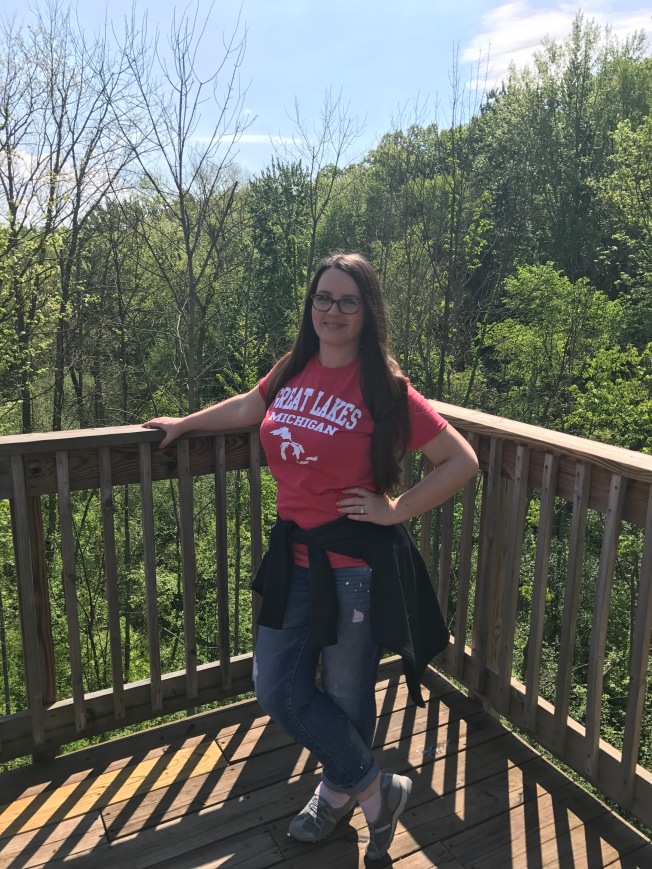 There is no after photo cuz I died a little bit. I don’t sweat like a lady, let’s just say.

Good thing there’s polish, or else I don’t have much else to brag about today.  I received some gorgeous shades from sweet Courtney with Posh Paints, and if you love flakies and you love toppers, well you’re about to have a var var good day. Lessss go! 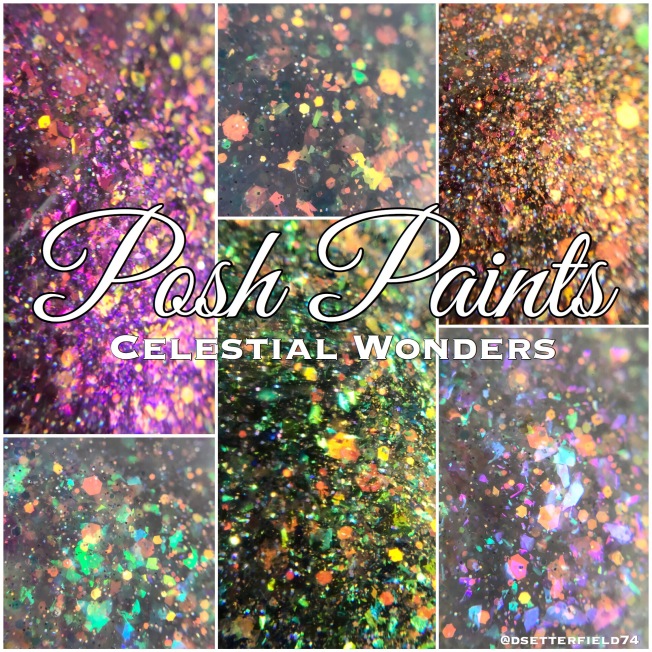 Yes. Things are starting out well. If angels start singing, no one’s surprised.

This collection is split into two groups: three full coverage flakies and three flakie toppers. So I don’t repeat myself (cuz, NO TIME. VAR BUSY.), I brushed three coats on top of naked nails for these first three shades, then for the toppers, I did two coats on top of a black base.

First up is Flaming Star Nebula: 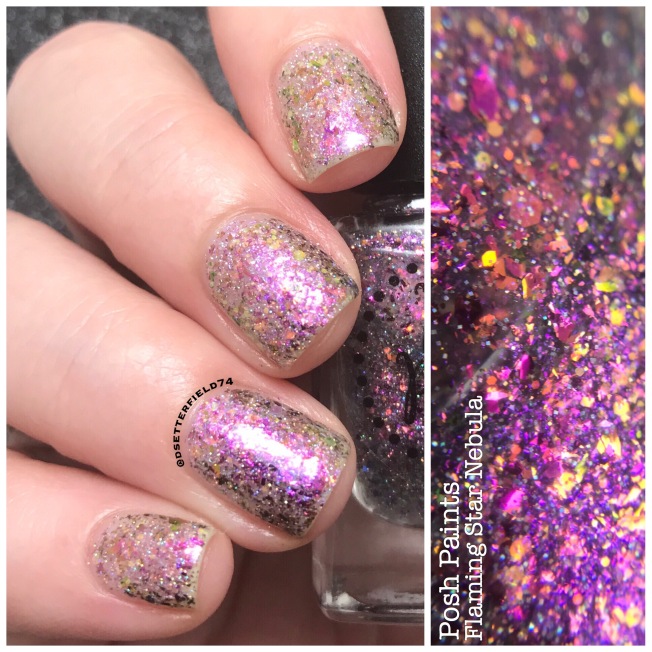 This is a multichrome flakie that shifts from voilet to pink to gold in a clear base with holo microglitter, color shifting glitters and a purple shimmer. 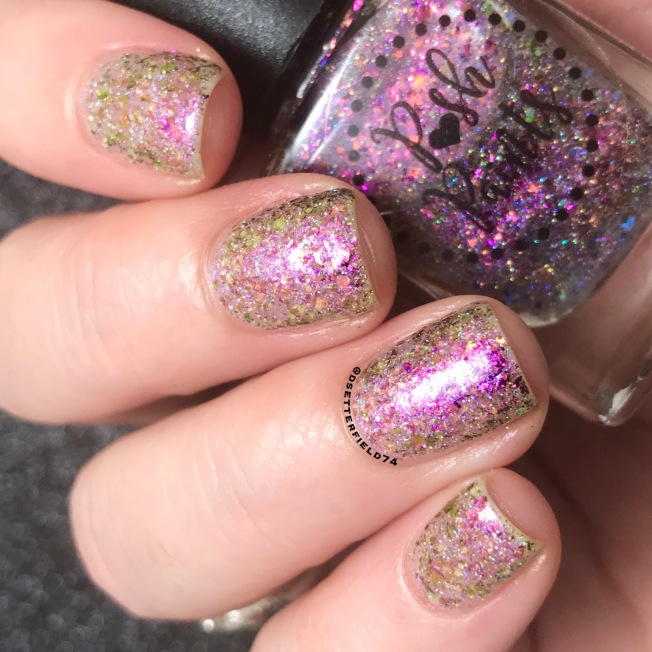 Serious business up ahead: 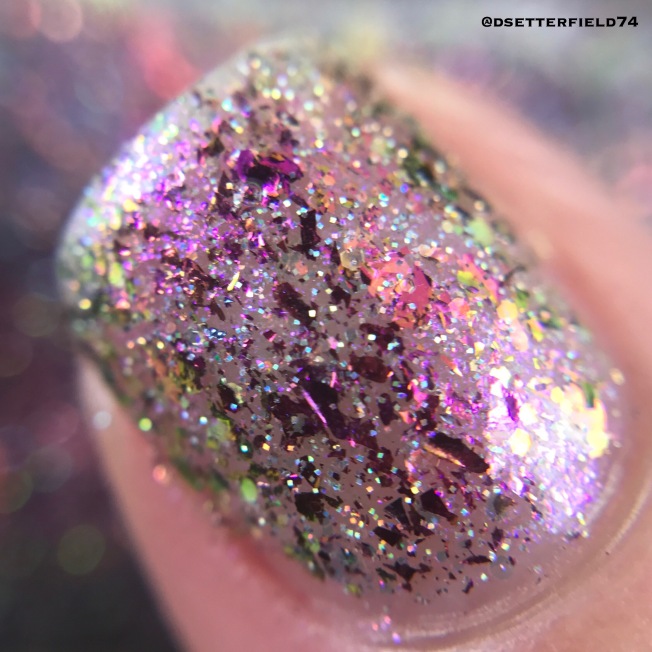 Formula was great. No gloop. Nice flakie distribution.  Since I brushed on the coats, the opacity wasn’t 100%, but you couldn’t tell that much in real life. However, sponging on coats two and three probably would’ve yielded a better result.

Naturally, I have no proof. BEST BLOGGER EVER, obvs.

But I did nail art, and it’s not hideous. Hooray!

Isn’t that the cutest? (Yes.)  I really love how it turned out, which doesn’t happen that often.  Oh, mojo, my dear sweet friend.

Used the Lina Feeling Shapely 09 plate and a matte top coat for funsies.

Next up is Crab Nebula: 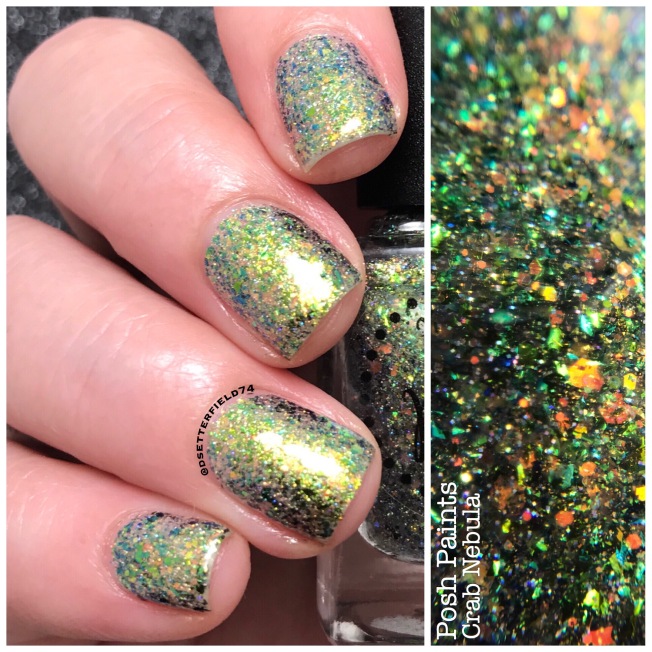 Ummmm, FAAAAAAVORITE! But of course, you already knew. Cuz where there is green, there is me picking my jaw off the floor like 18,000 times.

This one is a multichrome flakie that shifts from lime to blue to gold in a clear base with holo microglitter, color shifting glitters, and a gold shimmer. I love everything about it, and I want it on all the surfaces, stat. 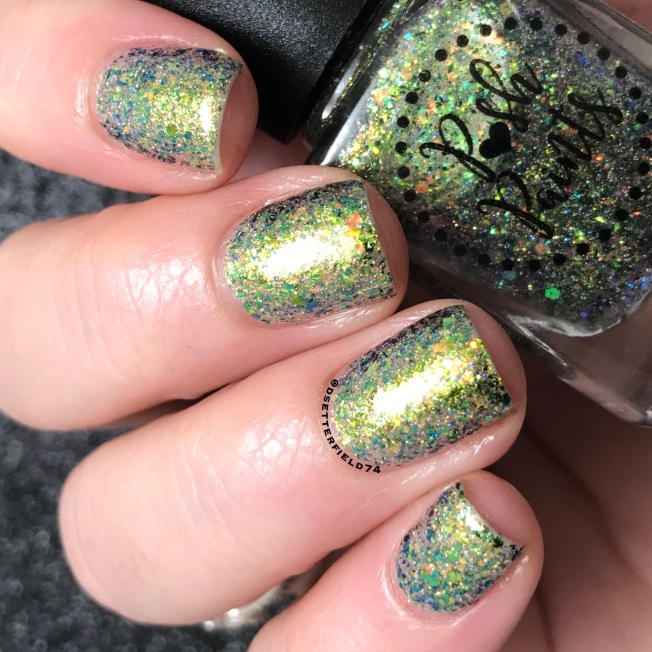 Another epic display of photography skill: 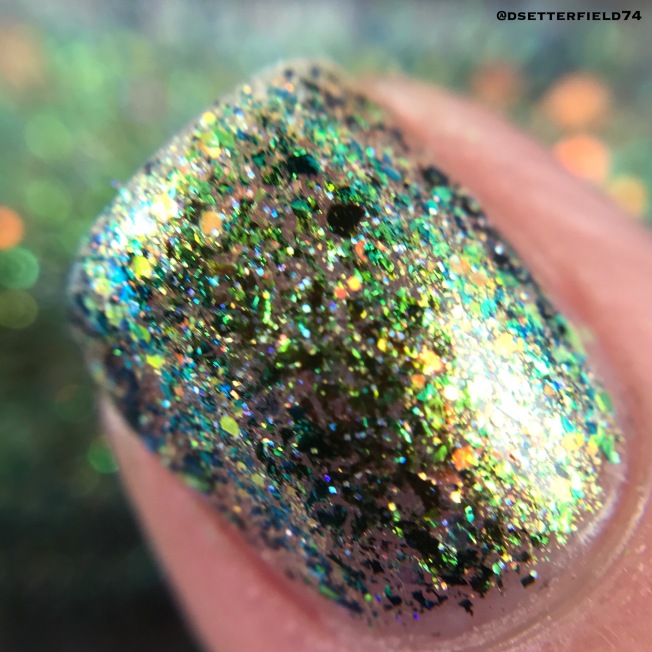 Cuz I MEANT to go blurry, that’s why.  Although you are distracted by green, are you not?  Now FOCUS. Art is coming. 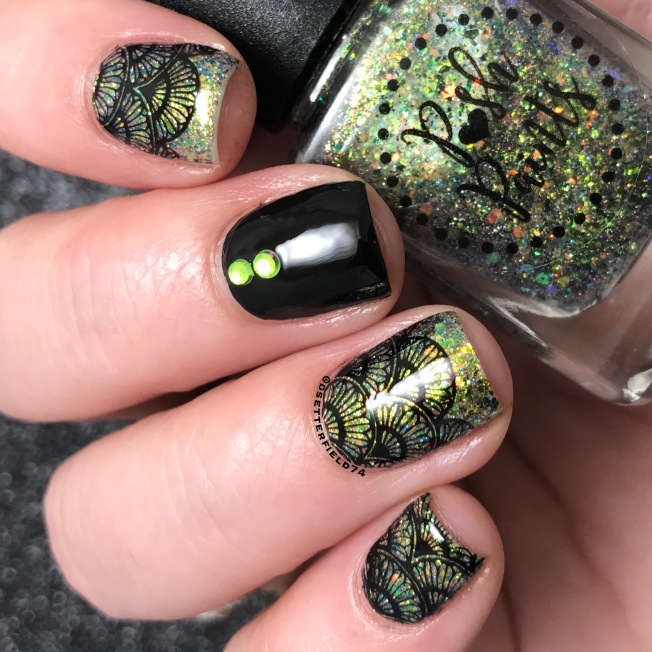 Not bad, right? I’ve done worse. If there’s a nail fail happening, chances are I’m on the front row. BUT NOT TODAY!

I used the Powder Perfect Art Deco 01 plate here, just so you know. 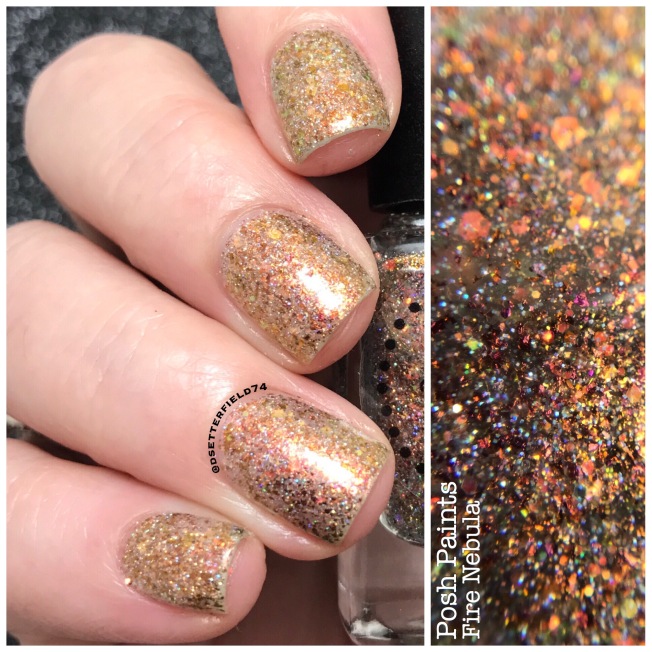 This one is a multichrome flakie that shifts from red to bronze to copper in a clear base with holo microglitter, color shifting glitters, and a copper shimmer.

Who’s all set for a prim and proper tea with the Queen? Bahahahahaha. NO ONE. Although if there’s a Drool Convention nearby, that sounds about right. An insane display of flakie: 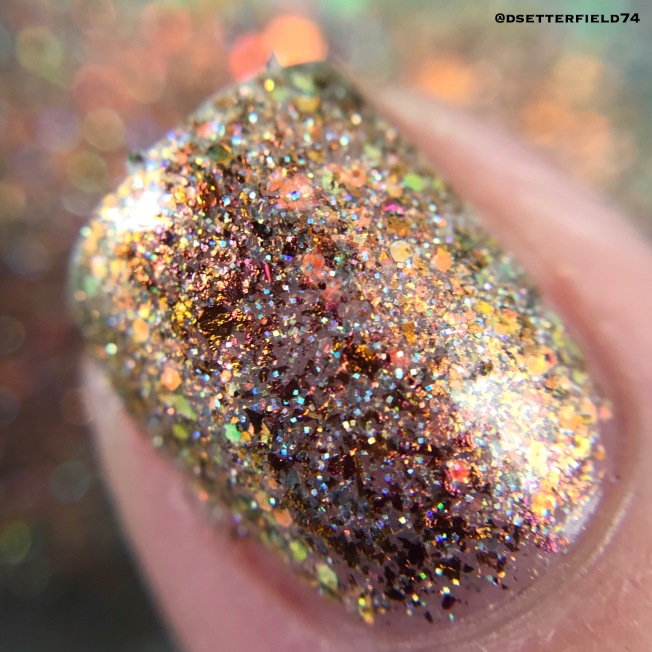 Gah! Just gorgeous.  You’re buying all these, by the way.

More good nail art. What is happening to my life? 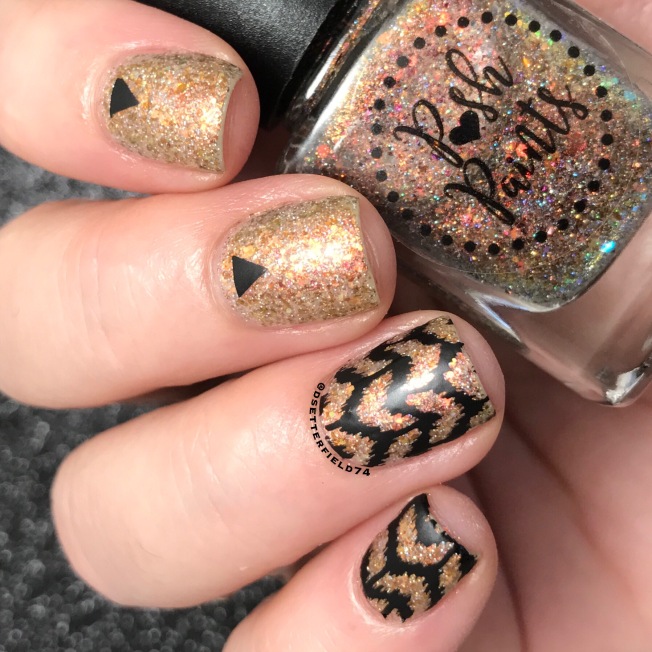 Certainly mojo’s got one foot out the door by now?

Used the Lina Feeling Shapely 09 plate for the baby triangles and the Uber Chic Beauty 17-02 plate for the hairy chevrons. Shhhhh, that’s what they are, I swear it. Okay, 23% sure.

Now onto the toppers!  Again, two coats over a black base. I know I said  up top I wasn’t going to repeat myself on this, but I know someone out there has just jumped into this blog in the middle like a crazy person.

Quick rundown of the colors then I’ll meet you at the bottom. First up is Little Gem Nebula: 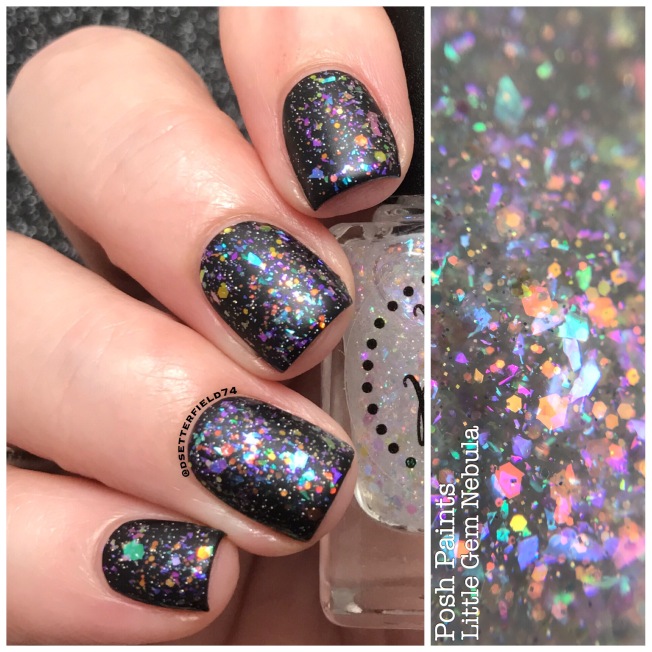 This one has a clear base full of green/blue/fuchsia/gold shifting flakies with color shifting glitters and holo microglitter. 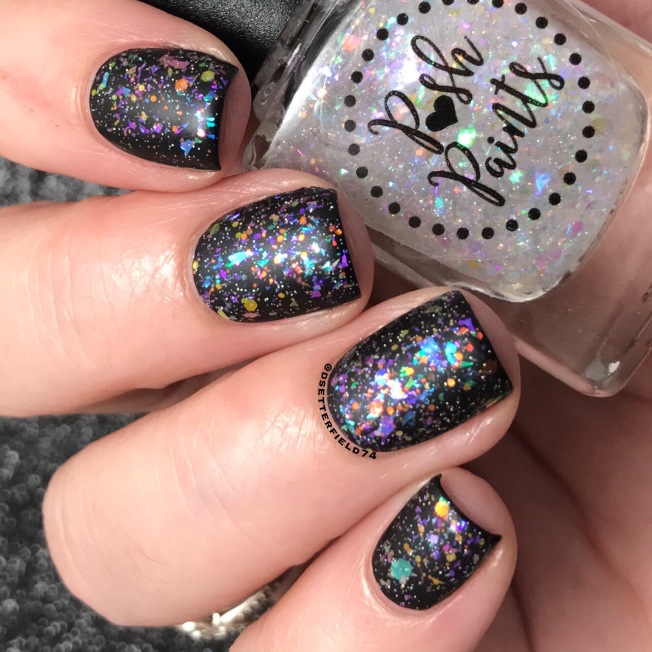 Next up is Wings of a Butterfly Nebula: 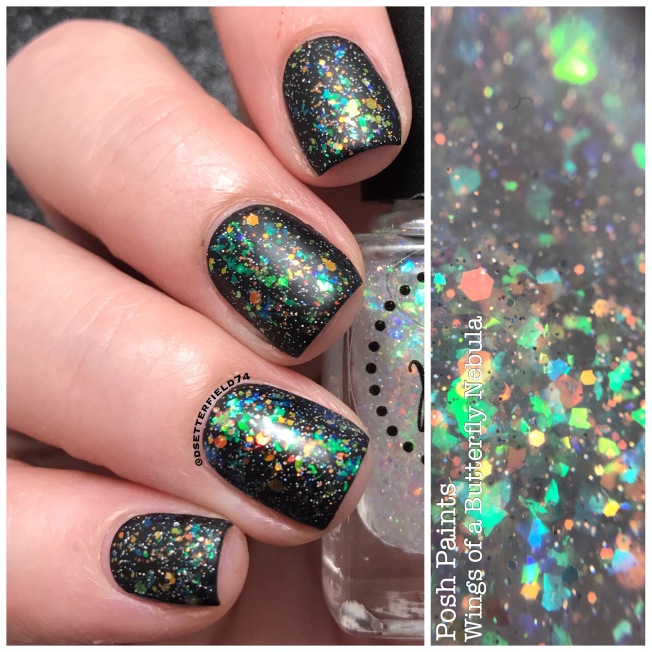 This one has a clear base full of green/blue/gold shifting flakies with color shifting glitters and holo microglitter. 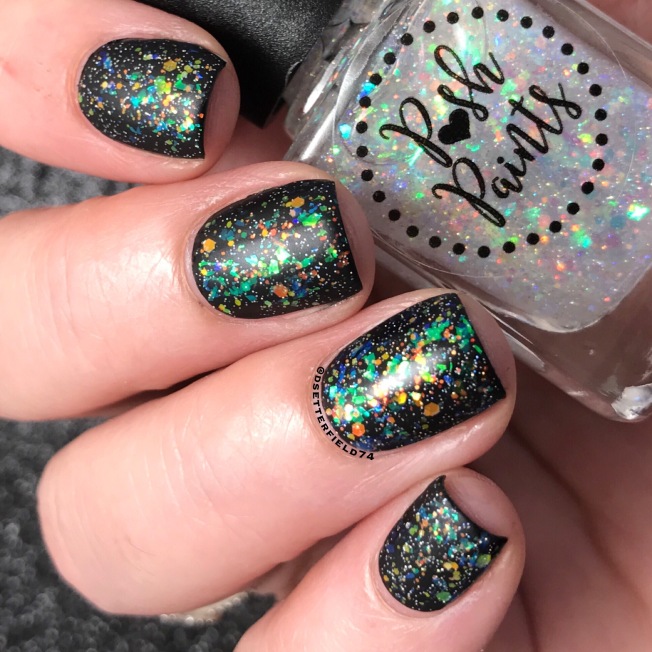 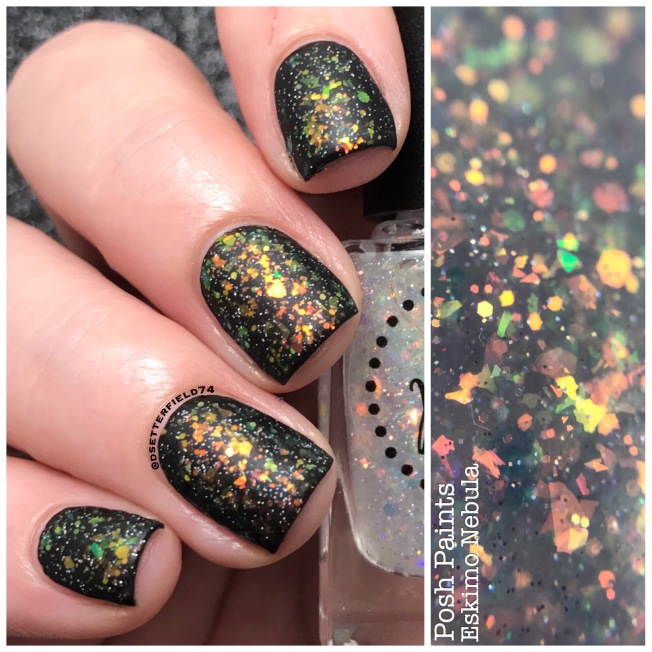 This one has a clear base full of red/green/gold shifting flakies with color shifting glitters and holo microglitter. 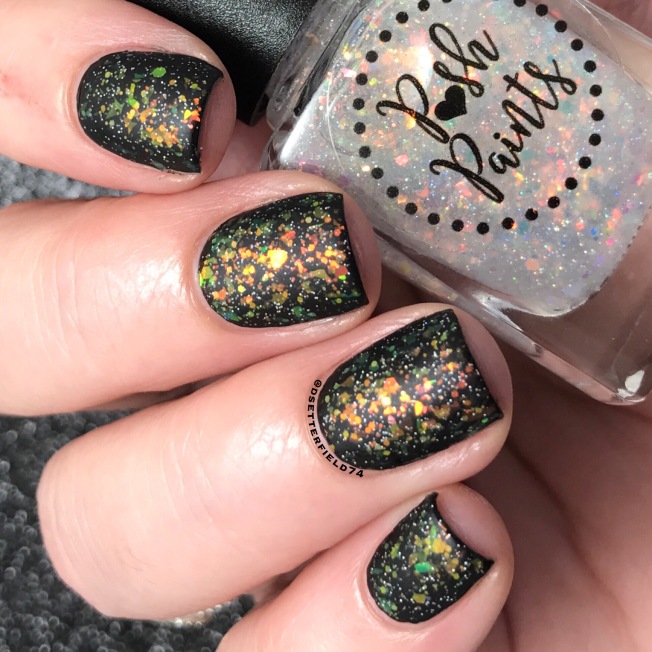 Every single one of these toppers is distinct from one another, and I freaking love that. You can clearly see one is pink, one is green and one is more orange. For those that also care about these things: high fives all around!

Easy to apply formula. No gloop on these either. OMG, is Leonardo coming next?! Cuz this day can’t get much better. 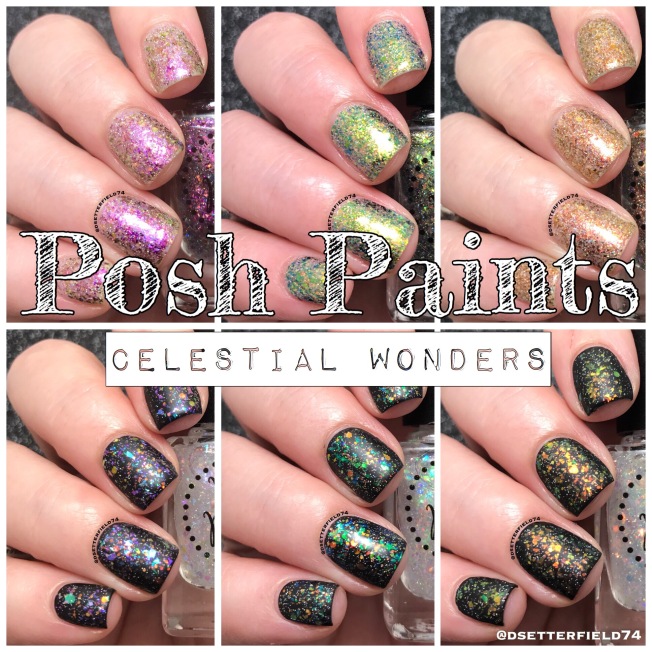 This collection released just yesterday, so no waiting required! Go ahead and toss all these in your cart plus 27 backups. Cuz there’s no sense in being rational at a time like this. The deets:

Happiness and joy and pajamas for everyone:  PRICELESS

Go treat yourself today. You deserve it. Click here for shopping!